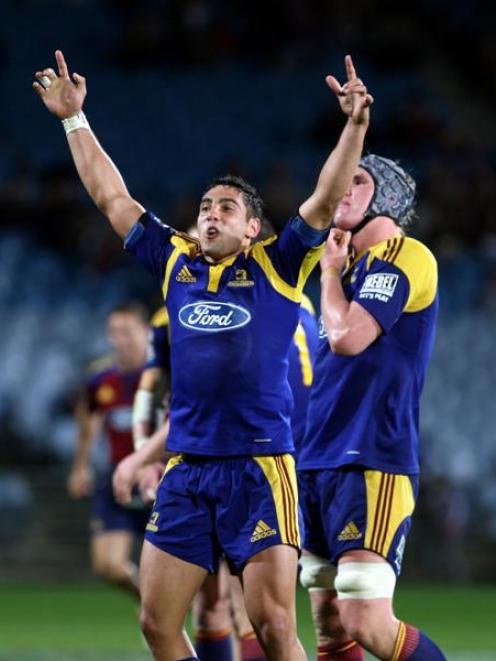 In a game that too often lacked structure, with consistent errors in handling plaguing both teams, the main talking point of a scoreless first half came when All Blacks captain Richie McCaw limped from the field after 30 minutes.

With New Zealand coach Graham Henry watching anxiously from the stand, McCaw sat out the rest of the match with his right knee heavily strapped and iced.

The Highlanders started strongly, but mistakes at crucial stages - and the customary solid Crusaders defence - meant their early possession advantage was too often wasted.

The return of halfback Jimmy Cowan provided more spark in the Highlanders backline, but the captain was perhaps guilty of trying to do too much in his first game since injuring an elbow three weeks ago in the Super 14 opener against the Brumbies.

The Highlanders pack was also boosted by the return of lock Tom Donnelly, who came on for the final hectic 20 minutes, playing his first game of the season after rupturing the ligaments in his right thumb in pre-season training five weeks ago.

Things improved only marginally in the second spell, as both teams were consistently guilty of errors and poor option-taking although the Highlanders' scrum looked impressive and kept the Crusaders working hard.

Young Canterbury first five-eighth Colin Slade had the honour of taking the first kick on goal, 35 metres right in front of the posts, after a 62nd minute penalty. He missed.

It took an eagle eye from former Northlander Daniel Bowden to finally get points on the board, with a sweetly struck penalty in the 67th minute.

Crusaders openside flanker George Whitelock was sinbinned soon for infringing in the ruck, and the Highlanders' lead was doubled soon after with another Bowden penalty.

An increasingly desperate Crusaders attack couldn't break through despite sustained pressure over the closing minutes, the Highlanders defence holding solid to secure the win.

Despite the match being the lowest scoring Super 14 game ever, Cowan was more that satisfied afterwards.

"We had a clear mindset coming into tonight's game and that was to win, to win at all costs," he told Sky Sport. "We didn't care how we got it, and we managed to win 6-0, so we'll take that.

"It's been a long time coming for the boys, they've really been working hard for the last three or four weeks. It's pleasing to come away with the four points today, and I'm just delighted."