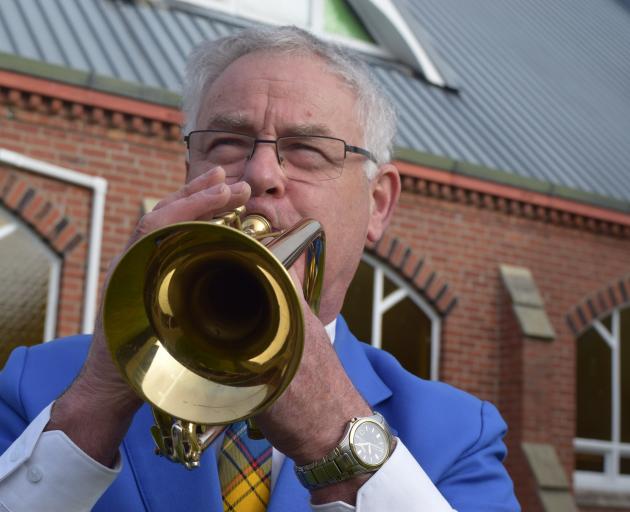 Mosgiel Brass Band musical director Phil Craigie, pictured playing the cornet, says players are keen to rehearse despite the cancellation of multiple events this year. PHOTO: SHAWN MCAVINUE
It was a case of Dunedin brass bands being "brassed off" once again, after Covid-19 forced the cancellation of the Otago-Southland Provincial Brass Band championships.

The event, which was to have been hosted by the Mosgiel Brass Band at the weekend, had to be cancelled for the second time this year.

Mosgiel Brass Band musical director Phil Craigie said the brass band contest had originally been scheduled for April, but had to be called off due to the Covid-19 pandemic.

Six bands were due to compete in the rescheduled event, including three from Dunedin and bands from Roxburgh and Invercargill, at the newly constructed Taieri College hall.

"However, under Alert Level 2 restrictions, there simply wasn’t enough room in the hall for the bands and spectators, so there was no option but to call it off," Mr Craigie said.

The competition would now be abandoned for this year, and would instead be held in Invercargill in April next year.

Mr Craigie said the situation was "fairly typical" of this year for Mosgiel Brass Band players and members of other bands in the city.

"Pretty much everything musical has been postponed or cancelled — we haven’t managed any public performances this year so far."

None of these performances had gone ahead.

However, band members had still been able to attend rehearsals under Alert Level 2 restrictions, and had enjoyed getting together to play, Mr Craigie said.

"It has been quite hard on the young ones, missing out on chances to play for an audience, but everyone has been enjoying playing anyway."

There was hope on the horizon, the band optimistic its popular annual concert and perhaps even the Santa Parade might be able to go ahead — depending on the country’s alert level.