Mr Taylor recently met up with leukaemia survivor Wayne Sutton, who credits his survival, at least in part, to receiving blood products.

At the lowest point of his battle with leukaemia, Mr Sutton, of Oamaru, faced having his life support turned off at Christchurch Hospital. However, he pulled through and is now in recovery.

Mr Sutton drove to Dunedin recently to meet Mr Taylor, as the two men have a history.

"I was on the diagnostic team that diagnosed Wayne, so it's my fault, as he keeps saying," Mr Taylor said.

It was touch and go for Mr Sutton during his treatment in the intensive care unit at Christchurch Hospital.

He had been given two weeks to live, if he did nothing about his diagnosis, in 2020.

Two years, a stem cell transplant, intensive chemotherapy and enough blood transfusions to change his blood type down the track, he is "one of the lucky ones" — only five out of 20 people survive leukaemia. 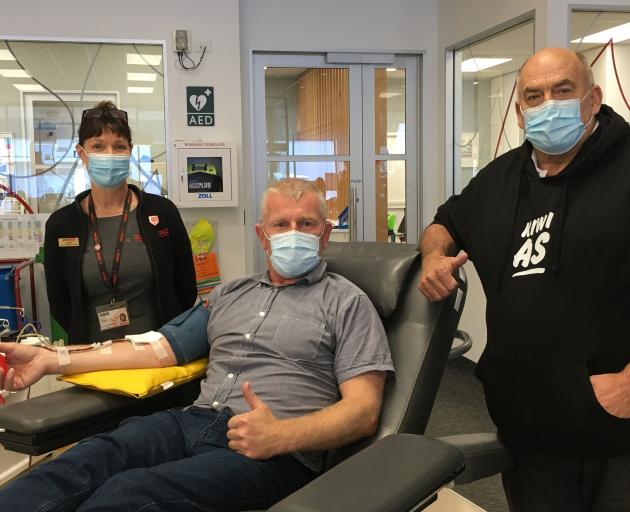 Mr Sutton and Mr Taylor met at the New Zealand Blood Service's Dunedin Donation Centre to help the service recruit regular donors, as Covid-19 has had a major impact on the number of people donating.

NZBS Dunedin donor recruitment co-ordinator Lynn Rodeka said during the Omicron period, about 25% of bookings had been cancelled or were "no shows".

The NZBS was asking people to give blood or plasma, but if people could not make their appointment, she asked them to let the service know.

Ms Rodeka said the process was straightforward, although plasma took a lot longer.

"We call it liquid gold ... there is a lot of goodness in plasma which we can use to make 11 types of medicine."

Mr Taylor donates plasma regularly and says he generally feels more energetic after donating, describing it as “legalised blood doping” in which the blood is taken out, plasma captured and the red blood cells returned.