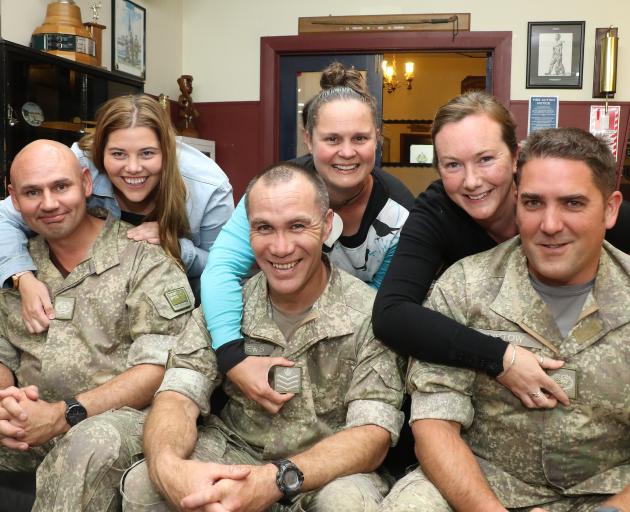 Two staff Sergeants and a Sergeant received senior promotions in recognition of their professional conduct and dedication to the New Zealand Army Reserve Forces.

The rank of Warrant Officer Class two was bestowed on WO2 Daniel Bristow, a supervisor at Black Head Quarries, who enlisted into the Territorial service of the NZ Army in March of 2002. Over the years WO2 Bristow has deployed on operational tours of duty to the Solomon Islands and Sinai.

The rank of Warrant Officer Class two was also bestowed on WO2 Phillip Witchall, who works for the Otago Regional Council at the Otago Civil Defence Emergency Management Group.

WO2 Witchall enlisted into the Regular Force of the NZ Army in May 1999 and was deployed on operational tours of duty to East Timor, Solomon Islands, Afghanistan and Iraq.

The rank of Staff Sergeant was awarded to SSgt Piripi Matthews who is the Mirror Youth Day Programme clinical team leader in Dunedin.

SSgt Matthews enlisted into the Territorial Force of the NZ Army in September 1998 and has deployed on an operational tour of duty to Afghanistan.

The 2nd/4th RNZIR commanding officer Lieutenant Colonel Tim Tuatini said presenting promotions to senior NCOs in his unit was the best part of his job.

"To the families of these senior reserve force soldiers it’s always hard to ask for them to balance their military careers with their civilian careers. But without their support our soldiers cannot reach the pinnacle of the soldier ranks in the army.

"Senior NCOs are an extremely important component of the New Zealand Army, as they are integral in the effective training of both junior soldiers and junior officers.

“The Warrant Officers are the people who are the right-hand men and women of the officers and they are there to support the soldiers with their extensive knowledge and skills.

"It is great to see these soldiers progress through the ranks and become the senior leaders at the many units we have here in the South Island," Lt Col Tuatini said.

"We only ever promote on merit, meaning anyone being promoted is an exceptional soldier with high attendance and a positive impact on the unit.

"Over the past three years I have been able to promote 22 people.

"This is excellent, in that it shows the unit is performing well and growing."