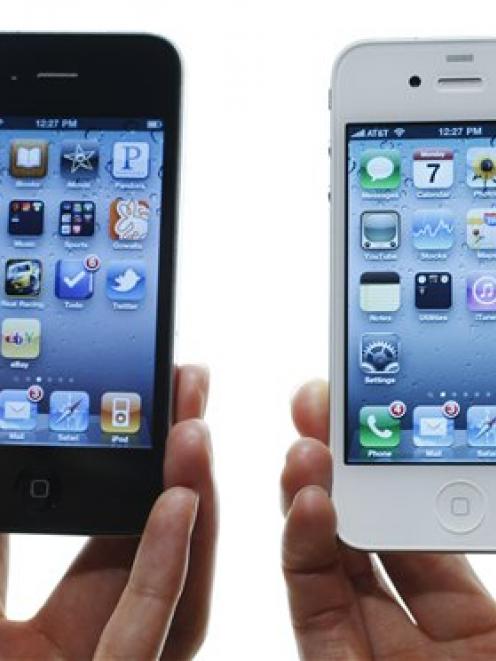 Apple's iPhone 4. Photo by AP.
Apple said it and its phone company partners took orders for more than 600,000 iPhone 4s in one day, the highest number it's ever seen.

The companies has now stopped taking orders for shipment by the June 24 launch day in the US.

The crush of orders sets the scene for long lines and potential chaos at stores when the next version of the iPhone is released.

Judging by previous years, shortages could last through the summer.

Apple and its partners started taking orders for the iPhone 4 yesterday. That morning, AT&T - the exclusive carrier in the US - had  to stop  taking orders, saying it had to focus on fulfilling orders already received.

By noon, Apple was accepting orders only for black models, and would only guarantee shipment by July 2.

The white model was unavailable for order.

Dallas-based AT&T said it received 10 times as many pre-launch orders on the first day for the new iPhone model as it did for the previous model last year.

AT&T also said it logged more than 13 million visits to a web page where current customers can check if they're eligible for a subsidised upgrade to the new phone.

That number was three times higher than the previous record for upgrade checks.

The price of the phone starts at $US199. Customers who aren't eligible for upgrades will pay $US200 more.

Last year, Apple sold more than 1 million units of the new model, the 3GS, in the first three days.

It was the most successful debut for a smart phone yet, and Apple struggled to keep it in stock for months.

The iPhone 4 will feature a higher-resolution screen, longer battery life, dual cameras and a thinner design than last year's model.

The ordering was marred by two major problems: Buyers reported problems registering their orders and an apparent glitch in AT&T's website was steering some customers into strangers' accounts.

Lines formed in stores as clerks tried to get orders into their systems.

"Many customers were turned away or abandoned the process in frustration. We apologize to everyone who encountered difficulties," Apple said in a statement.

On Gizmodo.com, a technology website, several readers posted stories of trying to log into their AT&T accounts to upgrade to the newest iPhone and being sent instead into strangers' accounts.

That could set the stage for identity theft scams, such as ordering other products under that person's name.

AT&T said it received reports of customers seeing the wrong account information but wasn't able to replicate the problem and was investigating.

But the company said the personal information users were seeing in one another's accounts didn't include Social Security numbers, credit card information or detailed call logs.

Just last week, AT&T plugged an embarrassing security hole on its website that exposed the e-mail addresses of people who had bought another new Apple product, the iPad.