With the iPod getting to be old hat, Apple has frantically piled on extras in an attempt to make the player seem fresh again. 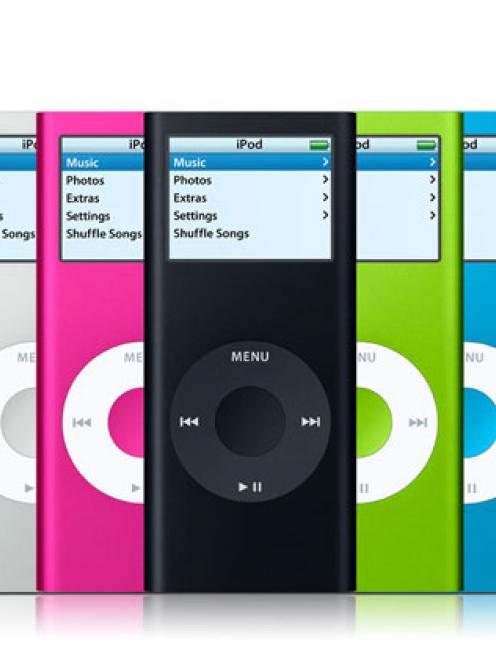 The new version of the iPod Nano, unveiled last week at a company event, crams into the little player a video camera, FM radio, microphone, speaker and even a pedometer.

Is this a sign of desperation?Well, if it is, bring it on.

The new Nano is an astonishing triumph of engineering and design that has managed to pack all these new features - along with the old ones - into a sleek, elegant device that's a pleasure to use.

None of the new features - with the exception of the pedometer - seem like gratuitous add-ons.

They're quality instruments that perform quite nicely, especially considering that the player is not much bigger than a business card.

Indeed, this fifth rendition of the Nano (first introduced in 2005) is wrapped in an aluminum case that is essentially the same size as its predecessor.

As one colleague noted, it would be easy to lose in the laundry.

The video controls are easily navigated.

The picture quality of the video is not going to win an Academy Award, but it was certainly passable for a YouTube postcard to friends and family.

There's at least one significant glitch for the company to solve.

After downloading the video to a Mac computer, it was supposed to be simple to send it along to YouTube or Facebook.

But it wouldn't export properly out of the iPhoto software.

After more than an hour on the phone with Apple technical support (the new Nano was new to them, too), a temporary work-around was devised.

It would not be a shock if more glitches are found.

Apple is known for taking big leaps forward, and sometimes that means it has to run damage control on the first release of a new or upgraded item.

The FM radio is the other major upgrade.

Apple has long resisted radio on the iPod, but maybe they finally gave in because they figured they could make money from it.

If you hear a song you like on some stations that broadcast digital text information, you can click a Nano button to "tag" the tune.

Next time you sync the player to your computer, those songs are listed so you don't forget them.

And with just another click, you can purchase them from Apple's iTunes music store.

The good news is the radio is easy to use, works well (outside) and does have one truly convenient feature - a TiVo-like buffer that allows you to halt listening for up to 15 minutes, and pick up right where you left off.

Although the scan feature works well, it's cancelled out the first time you choose a station as a clickable favourite.

The new Nano has not gone up in price.

Given that you'll be tempted to take a lot of off-the-cuff videos, you're probably better off with the 16GB model.

That is, if iPod players are still for you.

For not too much more money, you can move up to an iPod Touch (32GB $519), which is a sophisticated mini-computer in addition to being an audio/video player.

The Touch has Wi-Fi capability for email and the web, sophisticated GPS apps, and it can play serious games.

Then there's the granddaddy of the portable: the iPhone.

It's a good bet that the Touch will eventually get a video camera, too.

And with their Wi-Fi abilities, they'll be able to send those video clips directly to friends, family or Facebook.

Even so, the stylish Nano deserves to be thought of not as a lesser device, at least for the time being, but one that serves its own niche.

It's so small that it's great for the gym, hiking or a run.

Its shape and on-screen graphics (which on the FM mode are delightfully retro), humanise the technology.

And those videos - well, they're a gas. - David Colker.