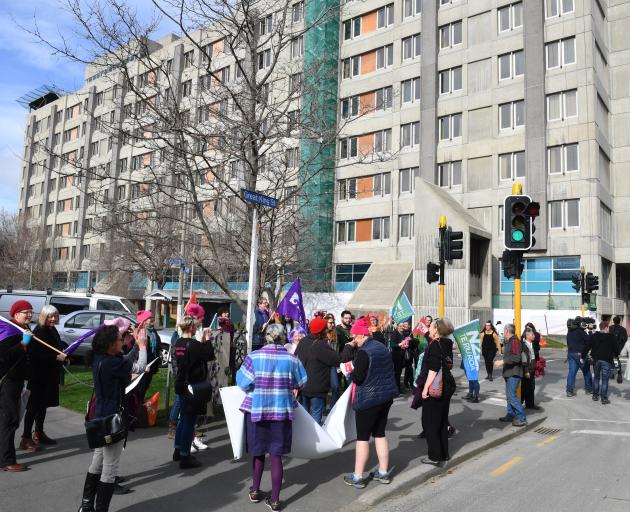 The Dunedin Hospital rebuild has proved to be a controversial and drawn-out process. Photo: Stephen Jaquiery

Health is a problem area  for National, but Labour’s plan for the sector is vague, reports Eileen Goodwin.

It turned out squeezing the health budget to a lower proportion of the country's income while focusing on a few manipulated targets would not travel in a third term.

The sector is troubled, evinced by the Canterbury District Health Board openly fighting the Government over its budget, and the delay-plagued hospital rebuild and care crisis in Dunedin.

Cash-strapped Canterbury will not face the same fate as Southern, whose board was unceremoniously sacked. Canterbury is a more powerful area.

Labour plans to neutralise health as a political issue with a funding jolt. But its approach is vague. It deflects questions about how much it wants to engage in root and branch reform with talk of reviews and a health sector summit.

There is no doubt some areas, most notably mental health, have the feeling they did in the 1990s, when reform was desperately sought and enacted.

For the first time since, mental health is an election issue.

The groundswell of feeling partly reflects societal change where people are speaking out about suicide and depression.

A decision to scrap the stand-alone Mental Health Commission, in 2012, arguably contributed to the crisis, as did relaxing strict rules for how DHBs could spend mental health funds.

Lessons of the past were forgotten.

The Ministry of Health should be providing leadership over the wide sweep of health, but it has become consumed by micro-managing and top-down control of DHBs.

Many senior staff have left and there has been a loss of institutional knowledge.

Implementation of the bowel screening programme will come under scrutiny in the next couple of years.

Screening programmes carry risk of unintended consequences. DHBs could struggle with increased demand, and questions over resources and whether the threshold for further investigation is too high remain unanswered.

The State Services Commission is sitting on what is said to be a highly critical review of senior leadership and culture in the ministry.

The DHBs have an increasing combined deficit, and while Health Minister Jonathan Coleman points out it is less than 1% of their revenue, he cannot have it both ways. Boards are under intense pressure to reduce deficits and it creates stress.

National made much of agreeing an equal pay settlement for caregivers, but it is not dealing with the equal pay bomb that has been ignited.

Nursing is the next big pay equity claim.

There will be no shortage of claims on the extra $8 billion over four years Labour is promising.

More than a billion of it will go to general practitioner visits and other primary healthcare.

Both parties have started to grasp the problems created by a partly privatised health system.

Not that long ago, it was considered daringly left-wing to subsidise GP visits.

The thinking had been that freeing up access to GPs created a moral hazard by opening up potentially limitless demand, but this was failed market-based thinking.

With more than a quarter of adults unable to afford primary healthcare, and ever-rising volumes of patients in emergency departments, something had to give.

Over the years, National talked a lot about community care, but much of the time that meant attempting to shift costs on to patients.

There is increasing acknowledgement of the health cost of inadequate social and economic policy, such as poor housing exacerbating the diseases of poverty, but it is yet to be reflected in major policy decisions.

Very astute and even handed analysis about the NZ health sector at a crossroads.

I agree with your ODT reporter. Labour's plans to review the crazy management of DHBs are sadly vague and lacking in detail.

Did you read the story in full? This parlous state is down to market ideology beloved of National.

Labour, not yet being Government, is not obliged to supply detailed health policy until it is fully developed. It won't have to do much to be better than National on Health.

The Nationals have a very clear health policy. If you can afford it you will have private insurance and you will go to private hospitals. If you don't then you will get seen to at some time. Unfortunately for too many people, that sometime is after cancers have spread, conditions have worsened and in some cases people just die.
For the lucky ones, they just accept pain and discomfort as part of their lives and get to rue the fact they aren't rich enough to go private.