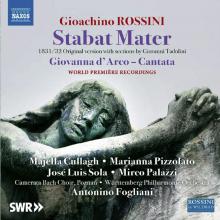 Gioachino Rossini’s Stabat Mater is a popular work in the sacred music repertoire with a complicated history.

The composer wrote it for performance in Madrid but, running out of time, enlisted help from friend Giovanni Tadolini.

Some years later the score was about to be published, so Rossini hurriedly completed it.

Tadolini’s contribution was tactfully "lost" and now only exists as piano reductions.

Conductor Antonino Fogliani orchestrated them to allow listeners to hear the original work for the first time since its premiere in 1833.

Subsequent performances were all of the revised, very different version in fewer parts, whereas the original had 13 parts.

The 13 tracks provide a world premiere performance of the music as it was in its earliest form.

They provide a very spirited and pleasing performance for 56 minutes, with all singers, including the choir, in excellent form.

A bonus for listeners is the addition of Marco Taralli’s 2009 orchestration of Rossini’s solo cantata with piano accompaniment Giovanna d’Arco (Joan of Arc, sung by Cullagh) whose four parts last for just over 15 minutes providing another generous lot of listening.

This disc is part of the "Rossini in Wildbad" series  with two fine examples of a contemporary Italian musician orchestrating  major works by Rossini, famous perhaps more for his operas.