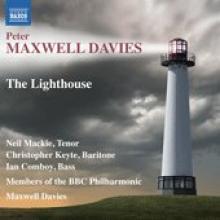 With music and libretto by Sir Peter Maxwell Davies in 1979, this chamber opera with prologue and single act is based on an unsolved 1900 mystery: a supply ship found an empty lighthouse in the Outer Hebrides, its three keepers apparently vanished without trace.

The composer links the lighthouse with a Tarot trump card and makes haunting allusions; ghostly visions are experienced by the trio marooned in a storm-bound tower. A satirical court of enquiry is brilliantly portrayed, then the following act opens with a chilling The Cry of the Beast, contrasted with three quirky short songs before the climax.

This is the 1994 Collins premiere recording - virtuoso performances by chamber orchestra and three voices, composer conducting. 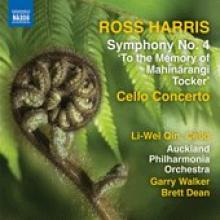 Symphony No.4, commissioned by the APO, is dedicated ''to the memory of Mahinarangi Tocker'', poet and songwriter. It is one continuous movement that refers to her works while a solo viola (Robert Ashworth) increasingly takes on her character and personality.

Meditations are interrupted by an exuberant orchestra, with the most violent outburst before the soloist's cadenza. There, his fortissimo high-note dramatically announces his most brilliant passages, before the orchestra joins forces in the final flurry.

The Cello Concerto was inspired by its virtuoso soloist, who in one continuous movement travels from darkness to light with plenty of opportunity for rich tones, dexterity and extravagant display. The orchestra revels in strong accompaniments to both works, recorded live.