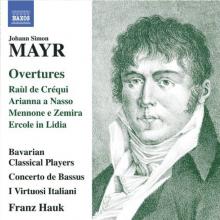 The name Johann Simon Mayr (1763-1845) was not known to me among composers until this disc arrived.

He was born in Bavaria, but made a name for himself in Italy. He seems to have excelled in writing overtures or short symphonic pieces and was a success with the public with operas.

Until the 19th century, the purposes of a sinfonia opening a larger work (an opera or oratorio) was to quieten down the often noisy audience and make them attentive.

At first the overture had no connection with the following music.

The earliest known was an overture for Montevideo’s opera Orfeo (1707) but it was little more than a written fanfare that he called a toccata.

Later, Lully devised the French type of overture that became popular with Handel and Bach, while Scarlatti was to the forefront of the Italian opera overtures written usually in three sections (fast, slow, fast).

Mayr followed the form and then developed his own wider and more virtuosic solutions.

The overtures to nine of his named works (operas, sinfonias and cantatas) feature in nine tracks with two early sinfonias ending the 11-track programme.

They show a good use of catchy melody, surprises and beautiful instrumental solos to quieten an audience.

I particularly liked the solo part for harp in Ercole in Lidia.

Raol de Crequi shines with a fugal opening and Gli Americani has touches of Mozart and Beethoven.

The three fine orchestras used are each conducted by Franz Hauk.