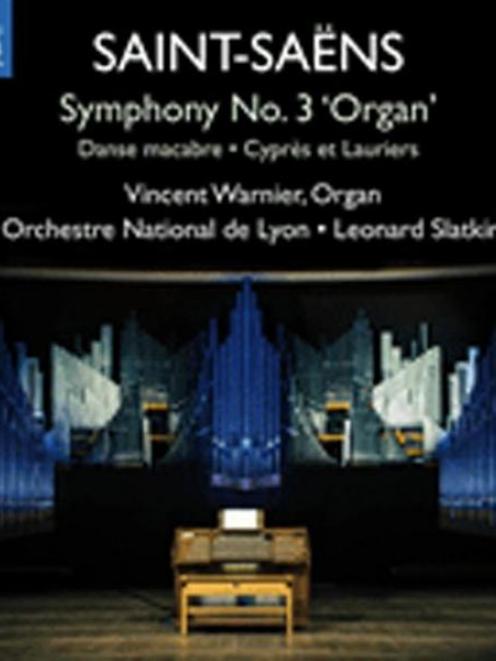 Taken from a Radio France broadcast in 2013, Orchestre National de Lyon, conducted by Leonard Slatkin, celebrates the inauguration of the newly restored organ in the Auditorium de Lyon.

Built originally for the Palais de Trocadero in Paris in 1878, and relocated to its current home in 1977, it is a famous instrument, boasting 82 stops and 6500 pipes.

Here, the monumental instrument is heard in all its glory in three works by the French composer, who must have known it well. He wrote Cypres et Lauriers with it in mind.

Dunedin audiences are very familiar with Symphony No.3, written in 1886, that produces the organ fireworks in its second half.

They will also recognise the spooky Danse Macabre.

It opens this programme, played solely by organ (arrangement by Edwin Lemarc), revised by Warmier, and sounding more demonic in some slightly jerky ways.

But it was the last item, Cypres et Lauriers, that particularly bewitched my ears.

Cypres is described as a ''poignant lament'' in the booklet, and written as an organ solo that could be played separately at funerals.

It builds to a huge climax.

Lauriers pays tribute to the Allied victory in World War 1, featuring a lively fanfare where the organ competes with military trumpets.

Besides being topical at present, this is exciting music so suitable for our town hall and Norma: I recommend it for Southern Sinfonia programming!

There is a wide dynamic range in this CD, so necessary for the organ.