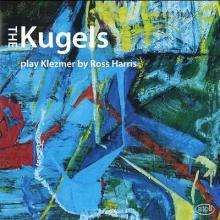 Klezmer is Jewish folk music from eastern Europe that was exported by Jewish emigrants.

The genre was developed in contact with Slavonic, Greek, Ottoman, gypsy and later American jazz musicians, using typical scales, tempo and rhythm changes, dissonances (slightly) and some improvisation in performances.

New Zealand composer Ross Harris says he found the original modes interesting but "mostly enjoyed the unusual juxtaposition of chords and melody" so he could not help dabbling in the music.

He picked up his small piano accordion to join Kiwi band The Kugels with Debbie Rawson (an outstanding clarinettist), Robin Parks (violin) and Jaqueline Nordon (bass).

He says it changed his life.

Harris was inspired to write his own klezmer pieces for the group, witness the collection of 23 that are played on this rollicking record.

The recital starts with darker, slower klezmer pieces, but soon includes the brighter, fast and jazzy pieces that incorporate some exciting, happier sounds.

The clarinet, with its ability to move from well-tuned notes to a dying sound of dissonance (a klezmer trademark), high harmonics and deeper plumbing from the bass instrument, is the star performer in most of the pieces with Rawson well able to exploit her talent in changing rhythms, scales, introducing some dissonance and using touches of improvisation.

Harris on accordion anchors the ensemble, but also lets it drift stylishly, and Parks provides the bright touches of gypsy-style violin.

The pieces played are all quite brief — from 1min 06sec to 3min 30sec.

There are many highlight tracks on this fine disc.

Producer and engineer Wayne Laird must be applauded for the clarity of the recorded sounds.

Verdict: Let’s hear it for klezmer!