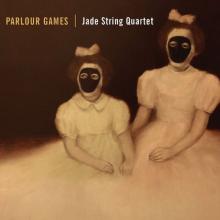 The Jade String Quartet was formed in 2003 by principal members of the Auckland Philharmonia Orchestra. It is a well-known group in the North Island, and has a regular series of concerts at Auckland’s vibrant Pah Homestead Art Gallery. Miranda Adams and William Hanfling (violins), Robert Ashworth (viola) and David Garner (cello) are the musicians in Jade’s debut album for Rattle.

I declare an intense interest in this disc, since daughter Miranda and her husband Robert are two of the quartet, while son Peter, of Dunedin, is one of the eight contemporary New Zealand composers commissioned to write the works for this recording. And I give the project full marks for musical artistry from all concerned. It is not surprising that this disc is immediately in the RNZ Concert classical music chart and some of its eight excellent, brand-new compositions have already been broadcast.

There are many rich and scintillating displays by this experienced quartet in very interesting works. The performances of the four instrumentalists enjoy the composers’ challenges —shown in vividly clear, detailed and full-spectrum recorded sound.