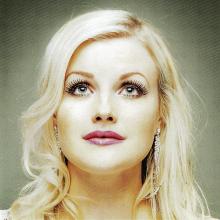 The 10 tracks in this debut album were recorded at the University of Otago’s Albany St recording studios (with local musicians backing).

The disc will be available in stores and online late next month. Classical fans could prefer bigger emphasis on serious works, but Morris now has her eyes on the spotlights of show business (after starring in Grease and many other local productions).

"Middle of the road" listeners with catholic tastes also can enjoy light and popular music and will appreciate here a great soprano voice, nicely in tune.

Morris was aptly described as an "ascendant star" when she sang Dvorak’s Song to the Moon in ethereal fashion and other works impressively at a recent Knox Church concert.

After years of classical training, Morris diversified into classical crossover and musical theatre, and shows her versatility and style in both styles, a rare "ground-breaker".

Preceding items include Andrew Lloyd Webber’s Don’t Cry for Me Argentina  and other well-known songs.

Morris’ performance with pyrotechnics of Girl in 14G (composed by Jeanine Tesari) is a real jazzy joy.

Other tracks are Meadowlark, It Might As Well Be Spring,  Love Never Dies, The Light in the Piazza,  Another Life, and Stars and the Moon.

Verdict: True stage voice. A star in the making?