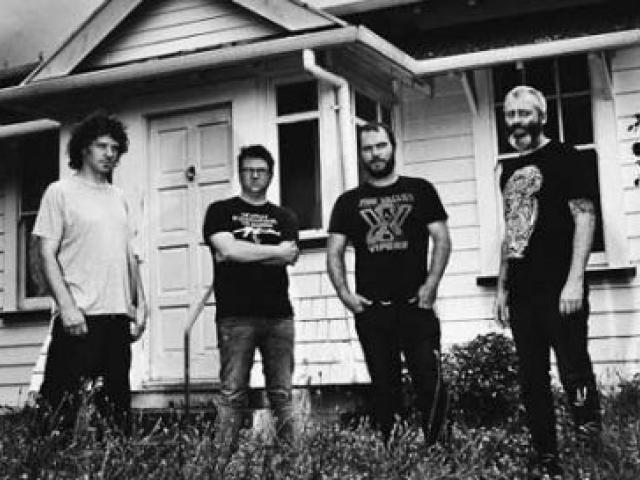 Beastwars are unleashing.
When I was growing up, Beastwars was a video game, now it's a band that has just released its first album.

The band proudly believes they were the "heaviest band on the line-up" at this year's Camp A Low Hum music festival.

Hot on the heels of sharing the bill with touring acts The Melvins and High on Fire on their recent New Zealand visit, the band is releasing the demon from its cage, in the form of their untitled debut album, and a five-stop nationwide tour.

Where many bands consult touring schedules to see if it's a good time to tour, Singer Matt Hyde looked to the stars, and says things are all falling into place. "We consulted Ken Ring, 'the Moon Man', about the safest day in May to unleash such a heavy album on the country and apparently the 9th of May is our safest bet with the moon in a waxing crescent," he claims.

The band is based in Wellington but has strong connections with Dunedin, through local master sound engineer Dale Cotton, who recorded their new album, before handing the raw files over to John Gordon for mastering. Gordon has worked with The Melvins, Sonic Youth, and Faith No More.

The album will be released on CD, digitally and on gatefold vinyl by Destroy Records through Universal.

> The band has a single available for free download through the bandcamp site: beastwars.bandcamp.com/.

> Beastwars are in the South, beginning at the Wunderbar in Lyttelton on May 20, and the next night at Chick's, Port Chalmers.


• Habana good time
Two legends of the southern music scene finally get together tonight. The Oxo Cubans are to play their first gig at Oamaru's Penguin Club.

The Oxos will be in Oamaru performing tracks from their CD Live at Isis, recorded at their Dunedin resident venue.


• Funking south
Wellington funksters The Aviators are also at The Penguin Club next week, on Wednesday, before playing Chicks Hotel on the Thursday, Arrowtown's Saffron on Friday and the Catlins River Festival on Sunday, April 24.

The video clip was recorded and filmed in Dunedin during October last year.

Brosnan says his love of the area and the wide range of talented people who live and work in South Dunedin drove the song. It's also his own special tribute to earlier Dunedin musicians who established the "Dunedin Sound".

Having "conquered popular music", Brosnan's next project is a steampunk opera.

One half of the duo, Ashley Cooper, was a New Zealand Idol finalist and together they were crowned 2010 New Zealand Country Duo of the year at the National Country Music awards.


• Getting a Serb
And in the week's best music news story, news agency AP reports that Serbia's flamboyant "turbo-folk" music queen Svetlana Raznatovic has pleaded guilty to embezzling millions from the sale of football players from her late husband's club.

Raznatovic, who is also famous for her marriage to one of the country's most notorious warlords, will spend one year under house arrest and pay a $NZ2.8 million fine, the largest imposed in Serbia.