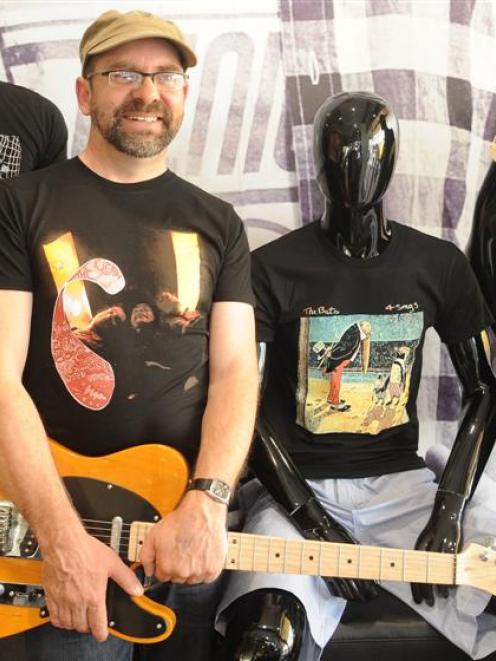 Robert Scott on the occasion of the release of a collection of Dunedin band T-shirts last year. Photo by Peter McIntosh.
The Rusty String Sessions is a monthly concert held on Thursday nights at Carey's Bay Hotel. Each event features four Dunedin musical acts (solo artists or bands), and occasionally an out-of town act.

The next Rusty String Sessions, on June 2, will feature Hana Fahy and the Low Tones, Robert Scott, John White and Inge Andrew.

Each act plays for half an hour. The concert starts at 8pm and runs to about 11pm. Entry is $10; advertising expenses are taken out of that and the rest is split between the performers.


• Quiet as a ...
American band Modest Mouse is looking to return to New Zealand to headline shows this July and August.

Modest Mouse plays at the Powerstation, Auckland, on Monday, August 1.


• Folk it up
Having recently completed her debut album Firefly, Auckland-based singer songwriter Michelle Nadia (below) heads south next week to perform at the Whitestone Folk Festival in Oamaru from June 3-6.

Nadia, who majored in vocals at the Australian Institute of Music, will be performing with bass player Bruce Lynch (Cat Stevens, Kate Bush).

"In the past I have been used to playing solo, but having others involved makes it so much more fun and dynamic," Nadia says.

"Bruce injects a real energy and sense of fun into my shows and it is a joy to gig with him."


• Out of cold storage
Many aged 40+ will remember Australian band Icehouse, (originally called Flowers until success in Europe brought a name dispute with Scottish band The Flowers).

Universal Music Australasia has a new sales and distribution partnership with frontman Iva Davies for the Icehouse catalogue of recordings, and the first release will be a 30th-anniversary edition of the band's debut album Icehouse.

This big-selling album will be available on June 13 through digital stores and music shops.

He has developed a heated marquee-style theatre to host actors, musicians, entertainers and performers for The Winter Garden Season 2011. The structure, especially imported from the US, has 150 seats inside and a huge facade and a contemporary windmill outside.

The season will run in Hagley Park from July 3-30 and present a variety of productions, from daytime classical music concerts and children's theatre to contemporary theatre, opera and dance.


• Let's dance
Tahuna Breaks has announced that UK producers Crazy P will be co-producing their new album. The band has been hunkered down in the studio over the past six months working on new material, aiming to transfer the sound of their progressive live act over to their forthcoming release.

The band is road-testing the new live tracks at several shows around the country this winter prior to the album's release later this year.