Cup over - what's next for stadium?

Dunedin's Rugby World Cup games are over, so what's next for the city's controversial stadium? Kim Dungey talks to the man at the helm. 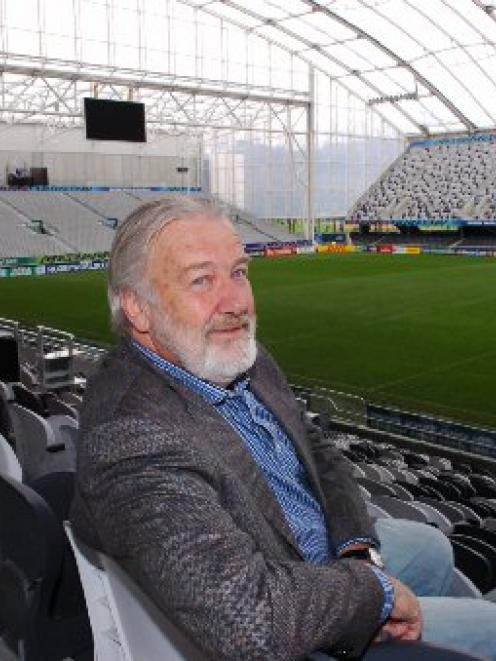 A covered stadium in Christchurch is a real likelihood if AMI Stadium is abandoned in favour of a new one being built in the earthquake-damaged city, he says.

Using any advances in technology will be a key part of maintaining a competitive edge and particularly appeal to young people, an important part of the stadium's future.

As a first step, the council-owned company will soon install up to 200 screens throughout the venue, including along the concourses, on which it can run information, advertising and competitions.

The system includes Wifi and is already used at Eden Park, where it can display images from the game, direct people to seats and detail the length of queues at food outlets.

In the future, he hopes fans will be able to use their cellphones to buy tickets to get into the stadium and possibly to order drinks from their seats.

The former Dunedin lawyer is also calling on local groups to take a combined approach to marketing the city, saying in the past they have had good ideas but not worked together.

The city needs to be revitalised and local venues, including the stadium, can be a "catalyst", he says.

With local Rugby World Cup games over, Tourism Dunedin will have offices in the stadium and the company has a good association with the University of Otago - "the biggest game in town". But other groups, from airlines to tourism and accommodation providers, need to be "brought into the fold" so everyone works in a united way.

"It's what we on the board call a Dunedin Incorporated approach," Sir John says.

While the New Zealand Rugby Football Union is still to make a decision on test matches in Dunedin, the stadium is in the running to get a rugby league test next year and to be a regular venue for the Wellington Phoenix, who return for an A League fixture against the Brisbane Roar on December 14.

He also expects it to host two or three artists a year of the calibre of Elton John, who will play on November 25.

Other confirmed bookings include the Big Night In on November 12, the New Zealand Masters Games in February, the 20th national leisure marching event in March, a vintage car rally in April and national Toastmasters and orthopaedics conferences later in the year.

"While the first six weeks - apart from the Phoenix - have been all about rugby we, as a company and a board, certainly don't see this as a rugby venue.

"Rugby is simply one of the things that will perform here. We need everything to pay the bills."

Dunedin's small population and relatively low incomes are a challenge but selling 32,000 Elton John tickets in 48 hours to Otago people was "quite phenomenal".

"It gives a lie to that negativity that is so often talked about in Dunedin.""If we get the right artists, I have no doubt that will continue."

The stadium will not be offered free of charge to promoters, however.

A Melbourne-based concert promoter saw red in August when two of his acts, Meatloaf and Rod Stewart, were passed over by stadium managers.

Meatloaf did not eventuate because the company had given its word Elton John would be first at the stadium, he says.

And in the other case, the promoter wanted the venue to be made available free. Doing that would risk losing large sums of money, as happened when a visit by David Beckham's LA Galaxy team cost the ratepayer-owned Mt Smart Stadium about $1.8 million in 2008.

"I don't think we'd endear ourselves to our shareholders ... if we put our foot in it like that.

"`If we think it's appropriate to offer an incentive and it's a risk the board's prepared to accept, we would certainly look at it.

"But I don't think we were asked for a specific incentive in relation to Rod Stewart. We were asked for our stadium for free, where we would take the food and drink and hopefully make enough money out of that to break even. That's not a risk our board has any particular appetite for.

"And the promoter, despite all the huff and bluff, is back talking to us."

Sir John would not comment on the stadium hosting Rugby World Cup games rent-free, saying the contract was signed before his company was formed but prudent cost control meant staff almost halved the expected $400,000 loss.

The retired High Court judge, who lives in Christchurch, was well aware of widespread opposition to the $200 million stadium when he agreed to chair the company that manages both that venue and the Dunedin Centre and Town Hall.

But he says that is a matter for ratepayers and their elected representatives; the company's job is to do the best it can at running the stadium.

"I have many old friends in Dunedin who are implacably, passionately and loudly in either camp and I can sometimes have a beer down here and get different views in each ear ... But it's here and it ain't going anywhere for quite a long time.

"I just think we should seize the opportunity and focus on what it can bring to the city."

In a recent email to staff, Stephen Jones, rugby writer for The Sunday Times in London, described the venue as extremely colourful, with as good an atmosphere as he had seen at a sports stadium anywhere.

But if he is ever in need of a reality check in terms of the challenge ahead, Sir John need look only as far as his grandchildren living along the road from the venue in Port Chalmers.

While his 12-year-old granddaughter enjoyed the buzz at the recent Georgia-England game, his 8-year-old grandson was more conservative in his praise.

"He said it was all right and the chips were good but he wasn't quite so interested".