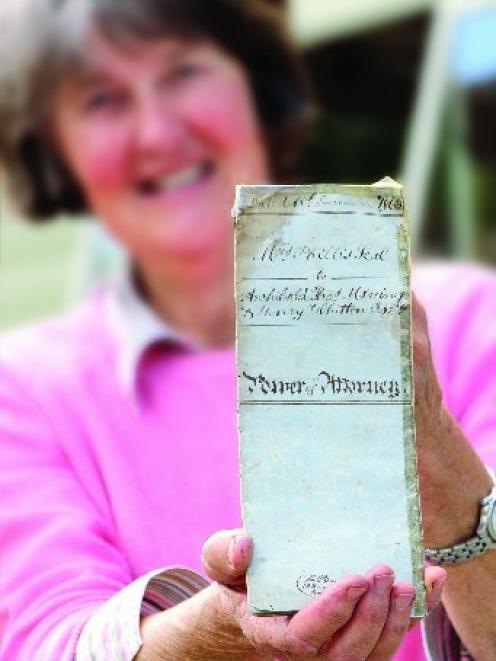 Edith Cromie, of Waihao Downs, displays the 153-year-old declaration of title to the brig Grecian, which she was given by a relative about 40 years ago. Photos: Bruce Munro.
An "extraordinary" piece of New Zealand history has come to light, 153 years on.

Last month, the Otago Daily Times published a feature article about the 1863 kidnapping of 144 Tongans by whaler-turned-slaver Captain Thomas McGrath.

Edith Cromie, of Waihao Downs, South Canterbury, was stunned to read the article, which finally made sense of a 153-year-old document she had been given 40 years earlier.

• Chained to a sorry trade

Historian Scott Hamilton has described the find as "extraordinary" and Mrs Cromie’s document as "a very exciting development".

Mr Hamilton’s book about the kidnapping of the ’Ata islanders, The Stolen Island, was published in December. In it he recounted how, in 1863, Capt McGrath, of Australia, and his crew, including several New Zealanders, tricked the islanders into coming aboard his ship the Grecian, and then sold them to a slave ship which took them to Peru. A few months later, the Grecian, which was supposed to have been returned to her owner in Hobart, Tasmania, arrived at Stewart Island. When it berthed at Campbelltown (Bluff) a few weeks later, McGrath was arrested on customs charges.

"I couldn’t believe my eyes," Mrs Cromie said of her reaction to the article.

The cause of her surprise was the article’s relationship to a legal document she had been given by a distant relative when she was in her early 20s. 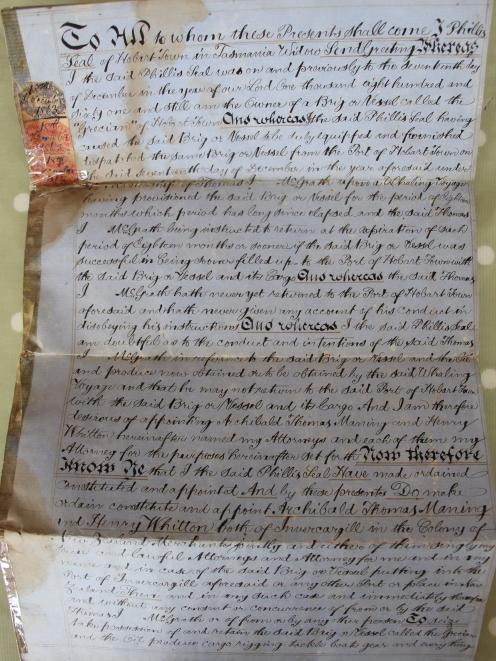 During the past couple of years, Mrs Cromie had begun transcribing the document and had tried to research its history.

"But reading the article really opened my eyes," she said.

"It verified what was going on and added a lot of new information."

Mr Hamilton said the appearance of the letter "validates the faith that New Zealand historians have in the longevity of their country’s historical documents".

"Although formal archiving was very limited in 19th-century New Zealand, and some important documents were destroyed through neglect, many treasures were preserved in attics and basements, and passed down as family heirlooms," he said.

The document has "considerable historic value", he says, "because it provides us with dates for some of Thomas McGrath’s adventures".

"I haven’t studied the letter in detail yet but there are undoubtedly other ways it throws light on Thomas McGrath and his crimes. For the descendants of the survivors of the slave raid on ’Ata, the letter will be a tangible connection to a tragic part of their history. It will confirm that the man who raided their island was a thief of property as well as people."