Restoration work on a major scale 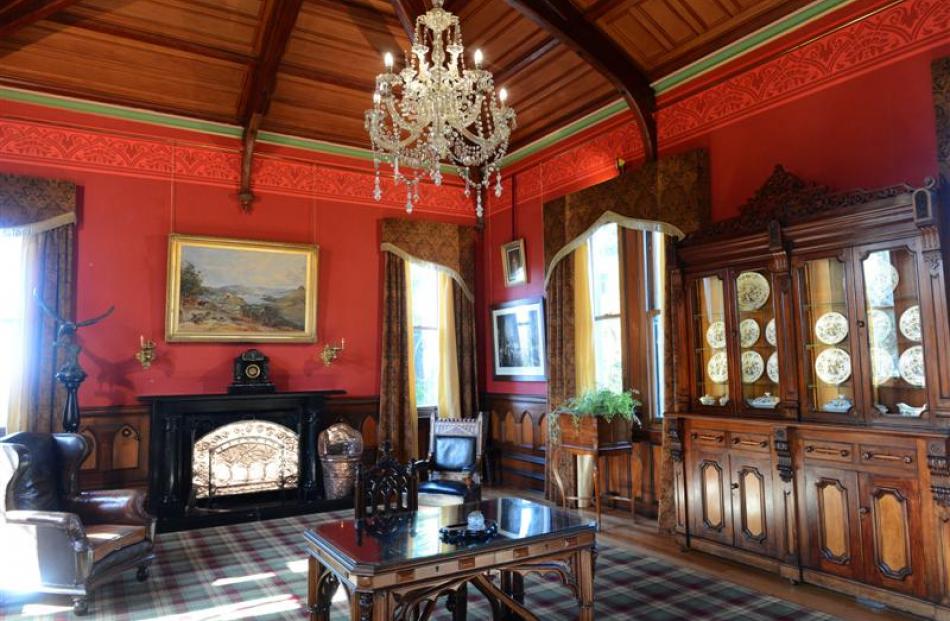 The castle's refurbished music room is dramatically different to how it used to look. 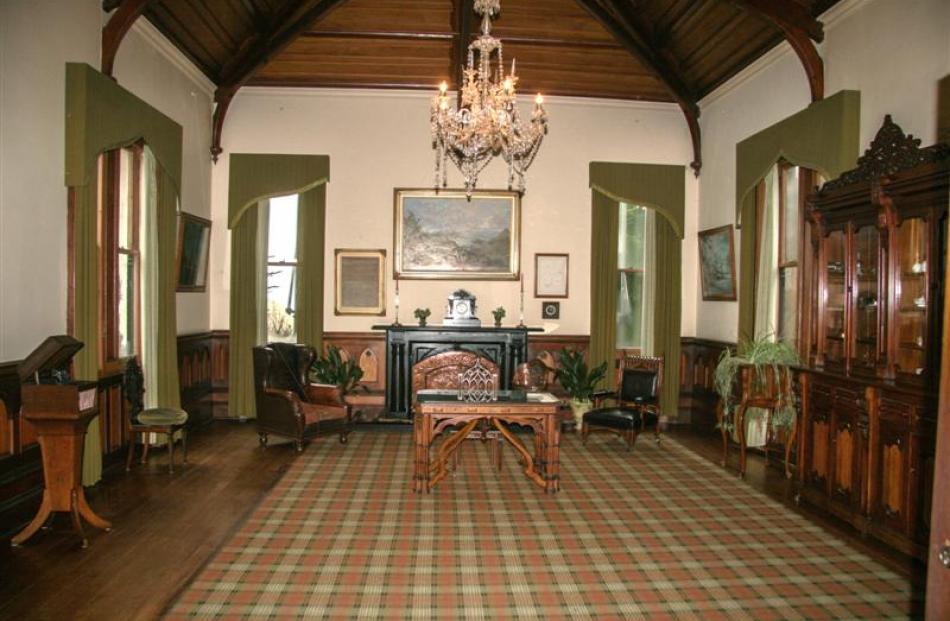 How the music room once looked. 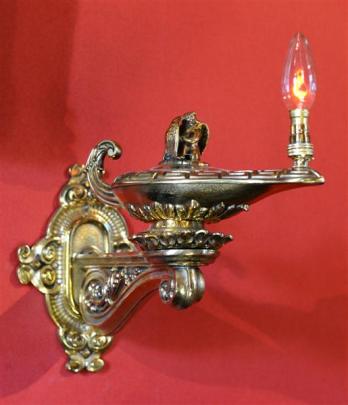 A pair of gas lamps were bought from an antiques dealer in England. Like the central chandelier, they now run on electricity.

The eagle on a plinth was bought by Margaret Barker at an antiques shop in Napier. Photos by Linda Robertson. 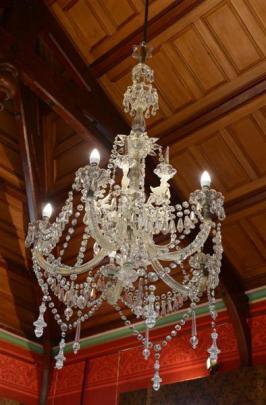 The room is 5m high and a long tool was needed to clamp and turn the gas taps on the chandelier.

After a year of planning and two months of work, the refurbished music room at Larnach Castle recently reopened to the public. Kim Dungey looks inside.

A $100,000 refurbishment of the music room at Larnach Castle has highlighted how innovative owner William Larnach really was.

For the first time, a panel of text tells how the banker and merchant used methane gas to light his magnificent property.

More than a hundred years ago, horse manure was piped underground from the stable to a purpose built chamber outside, directly behind the music room. Above this, Larnach built a privy for the use of family and staff so human manure was added to the brew.

The resulting methane gas was captured in a glass bubble and pumped up to the castle by a boy working a foot pump.

Director Margaret Barker says the entire castle was piped for gas but all the chandeliers and gas lamps were removed by previous owners when electricity was installed in 1927.

The central chandelier in the music room was returned to the castle after she bought it at auction in Timaru in 1982.

However, a key part of the refurbishment was reinstating a pair of gas lamps above the mantelpiece. The search for suitable ones took more than a year and eventually led to English antiques dealer Lennox Cato, an expert on the BBC's Antiques Roadshow series.

The once cream walls are now a rich red, with a hand painted frieze and cornices, and in a reference to Dunedin's founding settlers there is tartan carpet imported from Scotland and paisley velvet curtains.

Missing picture rails were reinstated and the floor was sanded and waxed.

Mrs Barker says all the details, from the colours to the way the pictures are hung on chains, are now much more in keeping with the rich interiors of the Victorian period.

No photos of the original castle interior had been found so the scheme was based on what was in Victorian homes and what they knew of Larnach's personal tastes.

Like most of the property, the room is ''quite masculine'', but an exception to that is the ''Orient'' dinner set displayed in a historic double bookcase chiffonier with fretwork that points to it having been made in Dunedin.

The Bridgewood dinner set was given to William Larnach and his third wife, Constance de Bathe Brandon, when they married in 1891. Mrs Barker recently bought it from Constance's great niece, Jill Moon.

A coronation picture on one wall alludes to Queen Victoria and the Empire, while a framed reference on another was given to Larnach when he resigned from the Bank of New South Wales in Geelong and accepted the position of general manager of the Bank of Otago in Dunedin.

Originally a billiard room, the area was converted to a music room in 1886 and now contains an early Victorian square piano, an Edison phonograph and a late Victorian piano with totara knot casing, believed to be the only one of its kind in the world.

The largest room apart from the ballroom, the music room is also the most used area at the castle, impressing visitors during the day and serving as a dining room for lodge guests at night. It was last refurbished 36 years ago.

Finding appropriate furnishings was only one of several challenges, foreman John Murray says. Historic damage from moisture seeping in through the stonework and a once leaking roof needed to be repaired.

The Dunedin weather also hampered progress, blowing trees across the road so tradesmen could not get there when planned and slowing the drying of the floor.

''We had three heaters plus fans in here and it took at least three weeks to dry.''

Even putting up the brass picture rails saw him having to make new brackets and spend days climbing up and down scaffolding.

''Everything was a bit uneven.''

Two heatpumps hidden inside a purpose built wooden cabinet ensure the temperature no longer hovers between 7degC and 9degC.

But the humidity needs to be carefully monitored because warming the room too quickly could draw moisture in through the external stone walls. The rest of the castle is heated by lpg.

Marketing manager Deborah Price says the project took eight weeks and the ''brilliant'' result was achieved with a team of Dunedin tradespeople who had gone out of their way to tackle some difficult issues.

''After 10 years of projects being done behind the scenes - voluntary earthquake strengthening, rebuilding the chimneys and [work on] the sewers - it's been wonderful to do something that everyone sees.''

''It's much better than doing the sewers,'' she says, adding that seeing the refurbishment come together has been a ''relief'' and a ''thrill''.

But the woman who has devoted almost 50 years to restoring the once run down castle says there is still a ''very long list'' of projects to tackle.

''It won't stand still. There's more to do. More things that people will see as well as things they won't see.''

• Set in 14ha of grounds on Otago Peninsula, Larnach Castle was built in 1871 by Australian born businessman and politician William Larnach for his first wife, Eliza.

• Initially a banker and later a New Zealand cabinet minister, Larnach spared no expense on his Robert Lawson designed home, which featured marble from Italy, slate from Wales, floor tiles from England and glass from Venice and France.

• More than 200 workmen took three years to build the castle shell and European craftsmen spent 12 years embellishing the interior. The ballroom was added in 1886.