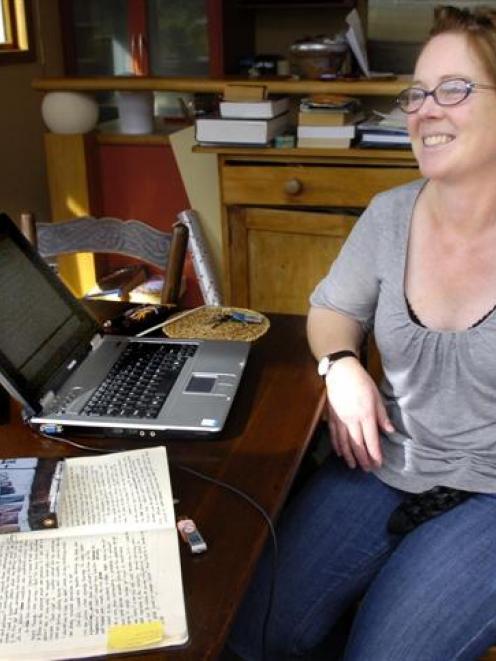 Laurence Fearnley. Photo by Jane Dawber.
Firmly rooted in the south, Dunedin author Laurence Fearnley's third novel in a southern trilogy has just been published. She talks to Charmian Smith about the appeal of southern New Zealand's small towns for a writer.

Laurence Fearnley is sitting in the sun at her kitchen table, her laptop in front of her and a couple of large notebooks filled with neat black writing beside her.

Outside the window, Northeast Valley and Mt Cargill bask in the autumn warmth as she catches up on notes she made for her next novel while on holiday in Melbourne the previous week.

She always carries one of these notebooks with her so she can write at any time, she says - when she's waiting for her son Harry after school, while waiting for a friend in a cafe or when travelling.

"I don't know if it's fear of failure or a need to prove myself," she says.

The third in a trilogy set in the South, it is loosely linked with Butler's Ringlet (2004) set in the Mossburn area, and Edwin and Matilda (2007) set in the Maniototo and Central Otago, by the theme of love, but each stands by itself, she says.

Butler's Ringlet was about the search for love; Edwin and Matilda about finding love, and Mother's Day about how hard it is to hold on to love and the possibility of losing it.

Part of the inspiration for Mother's Day was a windy day in Invercargill when the rubbish bins blew along the street.

She also wanted a contrast to the golden tussocks, big Maniototo skies and the warmth of the flawed lovers in Edwin and Matilda, she says.

"I was very keen to write an urban novel and Invercargill seemed like a good setting because it was still in the South.

"I really wanted to write a south Auckland novel but set in Invercargill," she says.

"I've always liked Invercargill and Bluff - that sense of being at the bottom, and the sea, and going down to the Antarctic, and the wind.

"I really like Invercargill a lot; I feel relaxed there; I like the people - you can just talk to them."

Despite a fine tradition of writers from the South, not many novels are set in this part of the country, and yet there's a great resource here, she says.

Although she grew up in Christchurch and lived in Europe and Wellington where she worked as a curator for several years before coming to Dunedin 2003, she feels a particular affinity with the South.

"I like the little communities and the differences between them.

"Mataura and Winton, while geographically they are pretty close, the differences in atmosphere and wealth are remarkable.

"They are the sort of places that haven't been touched by tourism the way the Catlins is now, or Manapouri.

"I find that very attractive too."

When beginning a novel, she starts with a place that appeals to her, spends time there and begins to imagine people who might live there.

Memories might also contribute: the memory of a school friend from Otautau who had a lot of family responsibilities and seemed so adult compared with her; a country cafe full of families celebrating Mother's Day, although they seemed a bit formal and awkward.

"I think what happens, particularly with something like this book, you start writing it and as the characters become stronger they tend to lead you in certain directions, and that's a nice feeling.

"I don't ever start a book knowing how it's going to end.

"This book [Mother's Day] was going to have a much sadder ending.

"It was going to be completely hopeless but I took pity on Maggie."

Maggie, the main character in Mother's Day, is a mother and at the core of her relationship is the sense of protection and love for her family which in turn gives her strength when things are tough.

"She's a decent human being. Things are not going to fall apart because she's such a strong character and she wouldn't allow them to.

"If she had been someone who just couldn't cope it would have been depressing, but she's a very generous person really, although she doesn't recognise it in herself.

"She's also a grumbler, but there's none of that cynicism or harshness.

"It's good people trying to do the best they can.

"I have a great deal of respect for her as a character and I think that comes through a bit," she said.

Maggie's life is tough. Her husband left her some years earlier and she manages to get by working as a cleaner and care-giver.

She has a near-delinquent son, Bevan, a daughter in Auckland, Justine, who has problems of her own with baby twins and their philandering father, and whose young son Storm lives with her.

Maggie's younger daughter, Lisa, has the potential to go to university but may not have the opportunity.

Maggie is usually so busy trying to make ends meet and cope and get on with life that she does not recognise opportunities when they arise.

When Fearnley was writing this book, the words of the Dixie Chicks' song, Top of the World kept going through her head - something like "There's a whole lot of singing it's never gonna be heard/Disappearing every day without so much as a word".

"I think that for a lot of people that's the life they lead. They are not in a position where they can be heard - it's the opposite to me really.

"I often think of women who've never had an education because of where they've grown up.

"They might have been the best writers in the world but you are never going to know.

"I guess in a way it's about my gratitude for my life and my empathy for people who don't have a life like mine."

Fearnley acknowledges financial and emotional support from her husband, Dr Alex McLelland, an immunologist at the University of Otago, and, since Harry (now 7) started school, her writing day has been considerably longer.

However, despite having seven novels and numerous shorter writings published, her second novel, Room, shortlisted for the Montana New Zealand Book Awards in 2001 and Edwin and Matilda in 2007, as well as several fellowships, including the 2004 Artists to Antarctica fellowship, the 2006 Island of Residencies fellowship in Tasmania, and the 2007 Robert Burns fellowship at the University of Otago, she still doesn't make enough money to live on, she says.

She is proud to be part of the Burns fellowship tradition and feels that among New Zealand writers there's a sense of support rather than competition.

"The Burns fellowship was a fantastic experience. It was that sense of being acknowledged for what I do in a way.

"It does help emotionally if you feel your writing is worth something.

"I don't need to know that people are taking me seriously but it's every now and again to get something like that where you feel as if your work counts for something."

She is now working on her eighth novel, set at Mt Cook during the 1950s.

It is about building alpine huts at the top of one of the glaciers but many other things were going on in the region at the time: building the Waitaki dams, the first ski plane landed on the glacier, the first all-women ascent of Mt Cook, the 100th ascent, and Edmund Hillary training husky dogs for his trip to the Antarctic.

• Mother's Day by Laurence Fearnley is published by Penguin (pbk, $28).