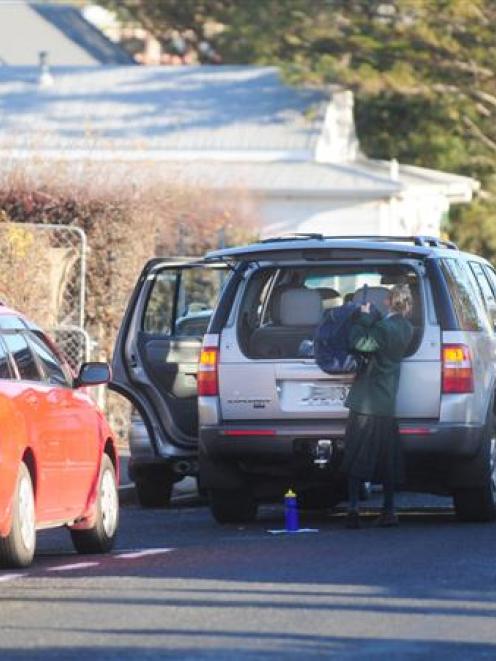 A vehicle parks on the carriageway of Tyne St near Columba College yesterday afternoon. Photo by Craig Baxter.
Here lies the dilemma. Do you park illegally outside the school gates for seven seconds to allow your 10-year-old daughter to jump in the car after school? Or do you keep on driving and let your 10-year-old daughter chase you around the block until you find a legitimate car park?

Dunedin parent Katya French did the former last week and received a $60 traffic fine from the Dunedin City Council for parking over a Tyne St driveway to pick up her daughter from Columba College - something which has left her shocked and angry.

"I had to stop because my child left the school premises, knowing that this is her usual pick-up time.

"She ran on the footpath after my moving car.

"There were no parks available.

"I could not proceed with driving as my daughter just continued running after the car, concentrating only on my car, not paying any attention to anything else around or on her footpath.

"When I finally stopped to let her in, another parent shouted out to me, `Move on - they are already writing your number plate for a ticket'."

"I couldn't believe it.

"The parking officer was at least 100m away.

"My stop was no more than five to seven seconds, and he was already writing us down."

"It's not a practice we want to encourage."

Mrs French argued parking outside Columba College before and after school was extremely hard to find, but the situation had been made worse by nearby construction work on a rest-home.

"Why are these officers being sent to the most vulnerable areas like the Columba College pick-up area?" Is this the best place to earn the most revenue for the Dunedin City Council?

"I found this whole experience shocking, inappropriate and unrighteous," she said.

Principal Elizabeth Wilson said she had noticed an increase in parking officer patrols in the school area, and believed it was an attempt by the Dunedin City Council to control or minimise parking infringements in the area.

She agreed there was "considerable pressure" on parking places for schools in the area, and she believed it could become even more problematic when the retirement home was completed.

"The problem may get worse postconstruction because the development will only have 40 carparks on site for 120 people staying there.

"Visitors will need to park on the street. There are safety concerns.

"People like to feel they can drop their children off safely at the school gate.

"I can appreciate that parents want to get as close as they can to the school gate to drop their children off.

"It's a modern phenomenon. I can't see a solution."

Mr Thompson said when people parked on yellow lines or double parked, that was when accidents were most likely to occur.

Children had been injured around schools in the past, he said.

He invited Mrs French to submit a letter to the DCC providing an explanation for her actions, and ask it to reconsider the parking infringement.