Beach erosion: 'For God's sake, it's time to take action' 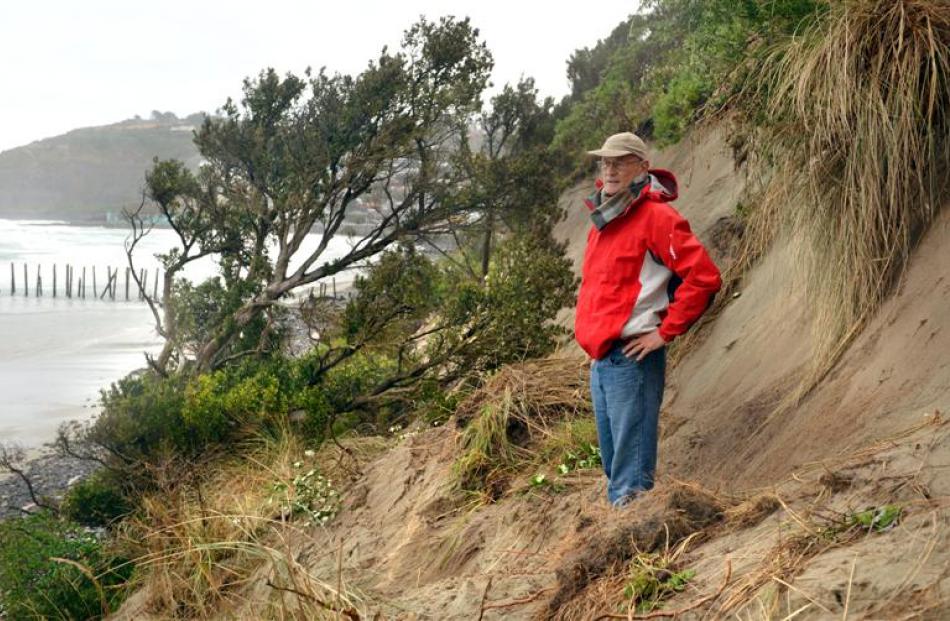 St Clair resident Bill Brown believes the area's sand dunes will vanish - and much of South Dunedin with them - unless the Dunedin City Council properly addresses erosion. Photo by Stephen Jaquiery.

Permanently fix the erosion of St Clair's sand dunes or give up on most of South Dunedin - there are no other options, a St Clair resident believes.

Heavy seas in the past month have washed out several metres of sand dunes.

An erosion expert is due to tour the city's beaches today.

Bill Brown, of St Clair, said yesterday the height of erosion and slips was now just a few metres from the highest point of the sand dunes.

The 66-year-old retiree said he had watched and listened to Dunedin City Council responses to the erosion problems over the last few years, responses which had generally amounted to ''let's wait and see''.

''But they've been waiting and bloody seeing for three to four years and this is what you can see. This is what happens.''

''If it continues like this, and from time to time you get these high tides, the next one that comes in will nibble the top of those sand dunes and the sand dunes will drop down another metre.''

Directly behind those dunes were houses - including his own - and behind those houses were the low-lying expanses of St Clair, St Kilda and South Dunedin.

''If council do nothing, which is not quite what they've done to date but close, and we continue to get these seas and winds and waves, they'll end up in South Dunedin at some point.''

Mr Brown said he had no expertise in beach erosion, but his observations of the boulder bank below the St Clair Salt Water Pool were that the high and gradually sloping rock wall worked well to diffuse the sea's power.

He suggested that rock wall continue, perhaps all the way to Middle Beach and beyond, to permanently put a stop to the constant erosion.

''For God's sake, it's time to actually take the action and solve this issue. Otherwise, option two is the waves coming into South Dunedin.''

Dunedin City Council infrastructure and networks general manager Ruth Stokes told the ODT yesterday the council had been advised in 2011 to operate a ''holding pattern'' on erosion control.

That type of long-term monitoring had a purpose - to get an indication of when was the best time to act, she said.

An erosion specialist would tour Dunedin's beaches today to reassess what the city's best options were, Mrs Stokes said, though indications were an extension of St Clair's ''sand sausages'' would be implemented.

At present, the sand sausages were stacked along the base of St Clair's dunes.

Extending them further towards Middle Beach appeared to be the best solution at this point, she said.

That project would cost about $300,000 - significantly less than Mr Brown's rock wall idea - and provide the protection the dunes needed, she said.

''That's what we're leaning towards.''