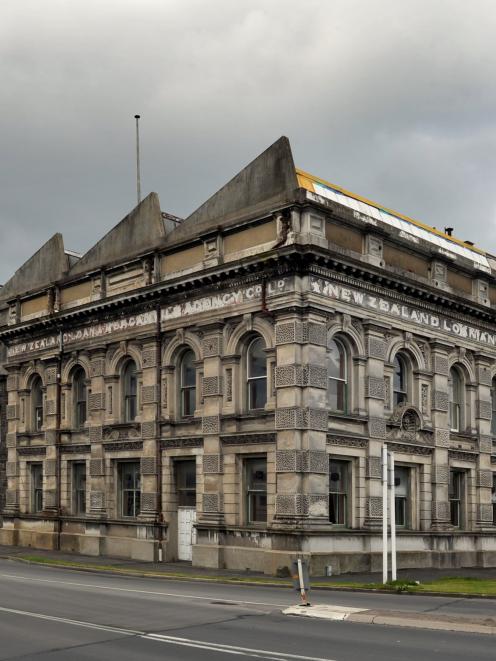 The Loan and Mercantile Building in Thomas Burns St, Dunedin. Photo by Gregor Richardson.
Plans to breathe new life into a historic Dunedin harbourside building have been put on hold because of an Environment Court appeal.

Nearby harbourside businesses had opposed the consent on the basis the area was not suitable for a residential development and it would threaten industry in the area.

The court was also considering a late application from Otago Chamber of Commerce to join as a party to the appeal.

The case was in the process of being referred to mediation, which if successful would prevent the need for a hearing, she said.

John Whitaker, from Farra Engineering, said it appealed the decision because it believed the area was for industrial use and having apartments next door would undermine the area's ''solid'' manufacturing base.

It would be making the same points it made at the original hearing, which included raising concerns around reverse sensitivity over noise and emissions which it feared would arise from having apartments next to industrial neighbours.

He sympathised with Mr Lund and members of the public who were excited at the prospect of a historic building being revitalised, but the appeal was about doing ''what's best'' for the solid manufacturing base in the area.

Dunedin art and architectural historian Peter Entwisle, who made a submission to the panel, said he was disappointed the council decision had been appealed.

The costs of maintaining the ''nationally significant'' building had increased and to secure its future ''sympathetic re-use'' was needed, Mr Entwisle said.

If the Environment Court ruled against Mr Lund's proposal, the building's future would be under threat, because history showed finding another use was ''extremely difficult''.

He hoped the situation could be dealt with through mediation, which in most cases proved successful.

In its written decision released last year, the panel - chairman Cr Andrew Noone and Crs Lee Vandervis and David Benson-Pope - said it considered the issues carefully following public hearings in August and October.

They decided reverse-sensitivity issues concerning noise and emissions from industrial neighbours could be effectively managed with insulation and ventilation and the development would have ''significant positive effects'', particularly in terms of securing the building's future.

They did not believe the decision would set a precedent, as its location on the edge of the north harbourside area was unique.

Mr Lund said he had been advised not to comment while the issue was with the Environment Court.