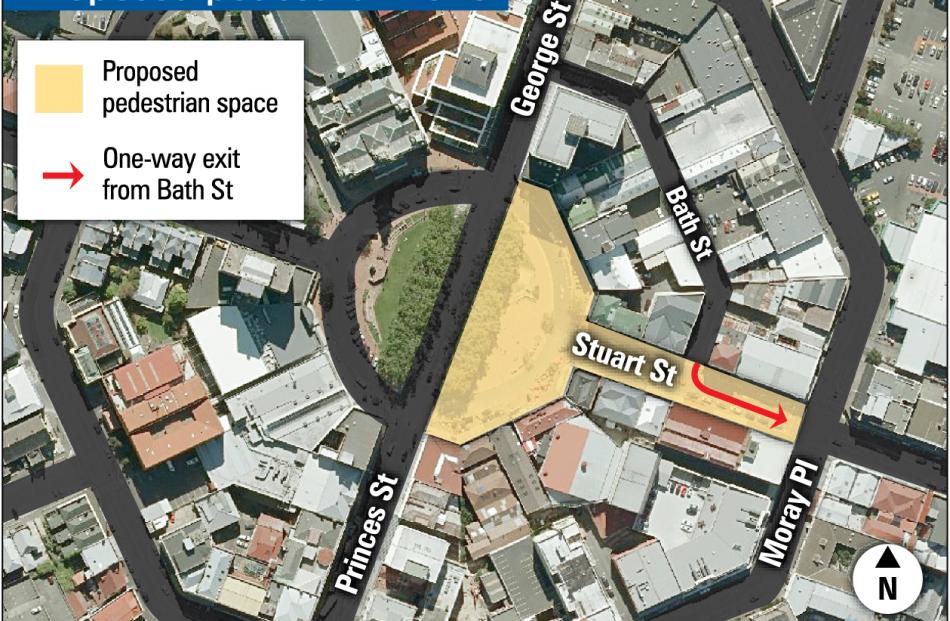 A proposal to turn part of Dunedin's Octagon into a pedestrian-only zone has gained momentum, after the Dunedin City Council endorsed plans to investigate a trial of the concept.

Councillors at yesterday's 2014-15 annual plan deliberations voted to ask council staff to report back on options to trial a pedestrian-only zone.

The proposal sought to turn the lower Octagon and lower Stuart St between the Octagon and Moray Pl into a car-free zone temporarily.

That followed a call from University of Otago students Alexis Belton and Georgina Hampton to convert the area into a pedestrian zone, backed by a 36-page proposal, during last week's submissions hearing.

Their pitch, warmly received by councillors at the time, envisaged the area becoming the ''heart'' of Dunedin's CBD and acting as a ''visual showpiece'' for the city.

That prompted Cr Aaron Hawkins to suggest yesterday council staff investigate options for the trial, which won support from councillors including David Benson-Pope.

Cr Benson-Pope said the inquiry would respond to the pair's ''very good'' submission, and it would be a ''timely look at our urban shape''.

Council chief executive Dr Sue Bidrose said staff were already planning to consider rejuvenation work in other parts of the central city, which could include pedestrian zones.

An examination of trial options for the Octagon and lower Stuart St could be included in that work, she said.

That prompted concern from deputy mayor Chris Staynes, worried the Octagon trial could interfere with other work already planned for George St.

Other councillors disagreed and backed Cr Hawkins' resolution, including Cr Richard Thomson, who said the council needed to be realistic and start small.

Any trial in George St would involve ''extremely significant'' changes, making it less likely it would proceed, he said. Instead, he supported the proposed trial in the lower Octagon and lower Stuart St as an easier way to ''socialise'' the idea of pedestrian-only zones.

''If we want to socialise the notion of pedestrian precincts within our central city area, then I think we should do that in a slightly more gradual way and in a way that gets some acceptance,'' Cr Thomson said.

''How cosmopolitan and worldly we all felt for two weeks ... I firmly believe the amenity values will be profound,'' he said.

Businesses would also benefit from increased foot traffic, he argued, pointing to overseas evidence which highlighted that trend.

''I'm stoked, humbled and proud to be a Dunedin citizen.''