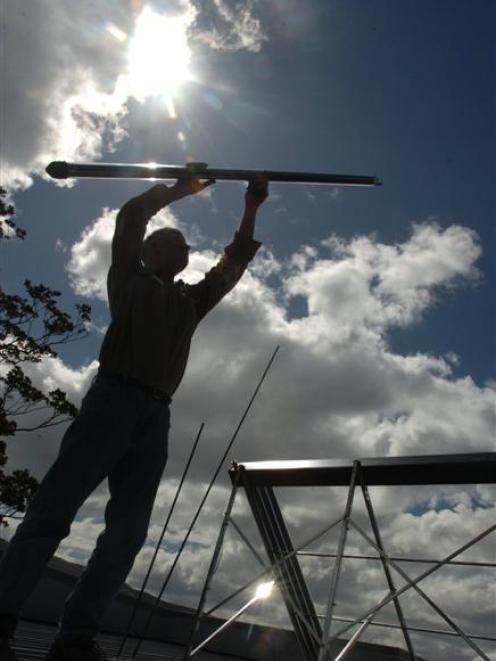 "The average fee price is around $300 and waiving that is a small financial gesture which enhances [council's] reputation as supportive of energy efficiency measures.

We want to encourage investment in solar heating so perceptions change, and it's just another mainstream option, rather than extra - parallel to, say, heat pumps."

Since July 1, 108 solar water heating units had been installed and 82 home-owners applied to receive a $1000 government subsidy.

"On the positive side, we should do what we can for the environment. But on other hand, it has no direct benefit and many would question why ratepayers should pay for other ratepayers' solar water heaters. Politically, it sounds great, but we would have to consider it in equity terms, rather than a lemming-like rush towards something which sounds attractive but could have the city stumping up $50,000 to $70,000," Cr Guest said.

Instead of devolving responsibility to councils, central government would be better able to subsidise consent costs, he said.

"Eliminating consent costs for solar heating could increase the prices of other permits. I have open mind but recognise there are conflicting issues and question if Government should be paying for it."

It was unlikely the committee would discuss the issue this year.

Power Options director Ian Buchan, of Dunedin, said building consent fees for installations over $5000 - the majority of those he installed around Otago - could be a "significant expense" for people who have budgeted specifically for solar upgrades.

Delays in gaining consent, sometimes up to three weeks, could make it difficult to set installation dates with clients.

"Electricians can self-certify work but plumbers cannot, even with solar industry association certification. And there are often delays. It might keep a few of the cowboys out, but it is not making it easier for the consumer or for [installers]."

Council chief building control officer Neil McLeod said a report on the consent process and solar water heating was being prepared for the council's planning and environment committee.

Government solar water heating grants increased from $500 to $1000 in May.

When announcing the increase, government spokeswoman for energy efficiency and conservation, Jeanette Fitzsimons, said hot water typically accounted for about 30% of homeowners' energy costs and a well designed and installed solar water heating system could provide up to 75% of annual hot water needs.