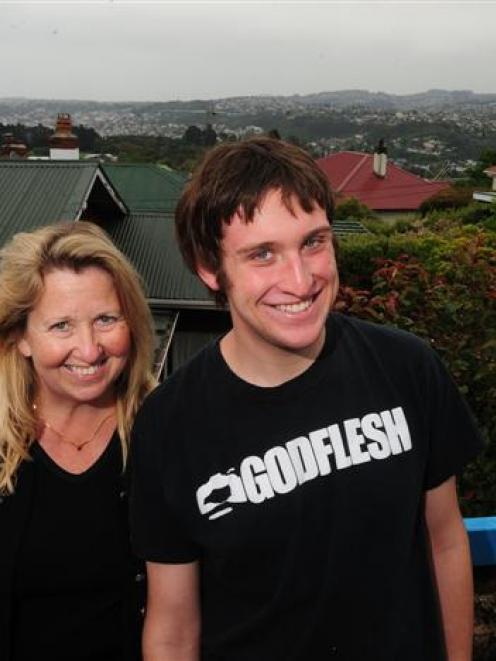 American permanent residents in Dunedin, Margi MacMurdo-Reading and her son, Walker MacMurdo (19), have voted for Barack Obama in the United States elections and plan to vote for Helen Clark in the New Zealand elections. Photo by Craig Baxter.
Two Dunedin residents will be celebrating more loudly than most if Barack Obama wins the race to be the next president of the United States.

Americans Margi MacMurdo-Reading and her son, first-year law student Walker, cast their votes for Mr Obama more than a week ago and will be glued to their television set from this afternoon to follow the counting.

"The fact that he's gotten this far, and if he does get elected, it will mean at least most of the [American] people are not nuts."

She says her family has suffered "the stigma" of being American while living in Dunedin - her children attempting to deny their nationality during their school days.

"You have no idea how many times I've been asked if I had bombed anybody lately or been asked why everyone in America is so fat, rich, loud and rude."

She believed the departure of George W. Bush from the White House would be "the first helpful thing".

"Apparently, what being American meant to many New Zealanders was that I was all for George Bush, that I must be a right-wing fundamentalist Christian, and that I personally looked forward to bombing small nations if given half a chance."

Mrs MacMurdo-Reading, from Minnesota, said she was not sorry she moved to Dunedin with her New Zealand-born husband, but living here had not been easy.

"We have stuck it out, and we are in the process of carving out a satisfactory life for ourselves."

She was "extremely proud" that an African-American was running for president.

"What it means is that actually all men are created equal and the sane, utopian thought behind the American constitution finally, at least a major chunk of it, is coming true."

Among the other candidates Americans are able to vote for are the Republican Party's John McCain, the Libertarian Party's Bob Barr, the Constitution Party's Chuck Baldwin, the Green Party's Cynthia McKinney and independent Ralph Nader.

Mrs MacMurdo-Reading said, as a permanent New Zealand resident, she was also able to vote in elections here and would continue to support Labour.