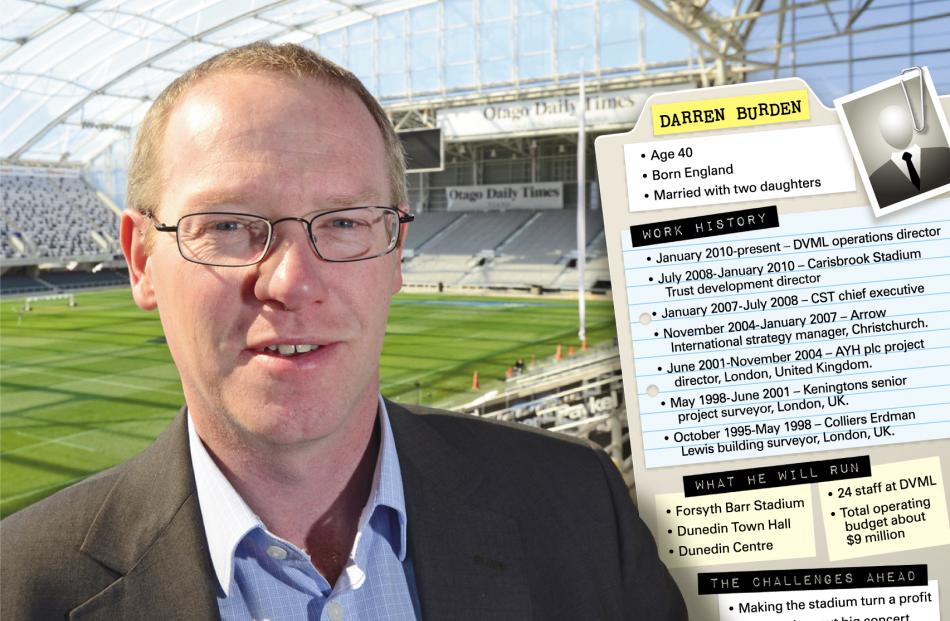 The size of the challenge ahead is not lost on Darren Burden as he prepares to become the next man to run the Forsyth Barr Stadium.

Mr Burden (40) is about to step into the glare of public scrutiny as the next chief executive of Dunedin Venues Management Ltd - the company running the stadium - later this month.

He will succeed departing chief executive David Davies on September 24, inheriting a laundry list of worries and the withering criticism that sometimes comes with the post.

However, speaking for the first time since his appointment, Mr Burden told the Otago Daily Times there were no nerves as he eyed the job ahead.

"I come into this eyes wide open," he said.

"To be quite honest, I'm really looking forward to starting and taking those challenges up."

Mr Burden had his first taste of what was to come last week, just days after his appointment was announced, when stadium critic Bev Butler contacted media to question his credentials.

She argued his decision to sign what ended up being a costly marketing contract five years ago - when he was chief executive of the Carisbrook Stadium Trust - raised doubts over whether he was the best man for the job.

Her views prompted Mayor Dave Cull to accuse her of "smear campaign" tactics, but Mr Burden found himself in the eye of a stadium storm before his feet were even under the desk.

"Unfortunately that goes with the job," Mr Burden said this week.

"I'm fully aware of that. I will take it on the chin and move on."

However, Mr Burden should be used to the debate and its sometimes hostile tone, having been involved in the stadium project almost since its inception.

Born in England, Mr Burden moved to New Zealand in 2004 after stints as a project director and surveyor in London.

He was named chief executive of the Carisbrook Stadium Trust in 2007 and continued in the role until switching to CST development director - overseeing stadium construction - in July 2008.

He became DVML's operations director in January 2010 and was responsible for ensuring the stadium was running smoothly in time for last year's Rugby World Cup, and when 35,500 fans flocked to Sir Elton John's sell-out show on November 25.

More recently, Mr Burden's focus has been on the refurbishment of the Dunedin Centre and Town Hall, which will become part of DVML's suite of venues once open again by early next year.

However, Mr Burden's main focus as DVML chief executive will be running the stadium.

Lessons had already been learned in the venue's first year of operation, from food and beverage service to sound quality and the treatment of some members locked out of a lounge they paid to use for tonight's All Blacks test match.

However, major challenges remained - from signing the next big stadium-filling concert, finding more room for children's rugby on the treasured turf, and healing the rift that remained in the city over the project.

The latter could in large part come down to money and finding a way to turn the red ink of a half-year $1.9 million loss into the black ink of a profit.

Asked what the chances were, Mr Burden was blunt.

"Anything's possible. A lot of that is going to depend on circumstances, as well as running a very efficient organisation, but it will be very challenging."

The financial results of the stadium's first year had been affected by a tough concert market, staff still learning to run the venue and the lost income from hosting Rugby World Cup fixtures, he said.

The key for future years could be tackling the "really massive challenge" of debt-servicing costs for stadium loans.

At present, DVML was required to pay rent to Dunedin Venues Ltd - the separate company which owned the stadium - to cover the loan costs, which meant a $3.8 million bill in the 2011-12 financial year.

Without that rent burden, DVML would likely run a small operational profit in the next financial year, he said.

Any change left open the question of who would pay if DVML did not, but Mr Burden planned to raise the issue as part of the review of DVML and the stadium already under way and due for completion later this year.

"The issue is ... before we even start we have to achieve a substantial sum of money for rent.

"The reality is if the rental figure was reduced, clearly that makes the possibility, or probability, of DVML being profitable a lot easier."

The review was well timed and Mr Burden would have input, but he did not expect major cuts to DVML's operation to result.

The company had already been through a cost-cutting review, which - together with extra council funding - had helped reduce the $3.3 million combined loss forecast by 2015 to an $873,000 loss.

"My view would be there isn't really any scope to reduce those costs a lot further. We are running a really tight ship," he said.

He saw a "huge amount of potential" in the stadium in coming years, but securing more meetings and conferences, functions, sports fixtures and one-off events to help increase revenue would be important.

So, too, would be signing a follow-up performer to rival Sir Elton - although exactly when that would happen remained a tough question to answer.

"The reality is it's extremely difficult to get major acts here, but Elton John proved we can deliver.

"It will happen eventually. We will get the next major act in, and I'm hoping sooner rather than later," Mr Burden said.