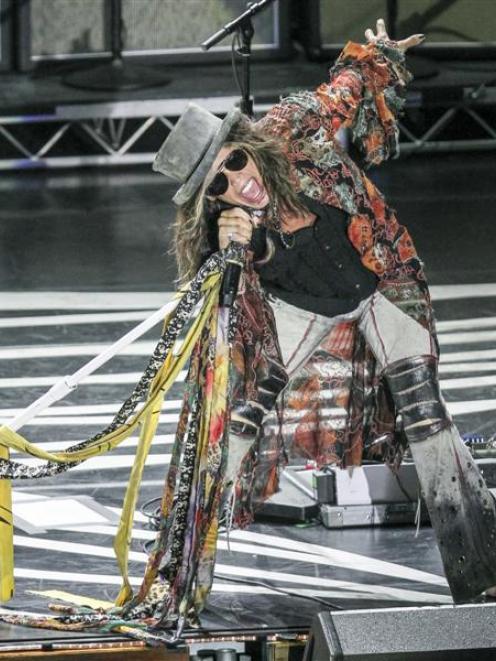 Steven Tyler in action at the Aerosmith concert in Sydney at the weekend. Photo by Aaron Saye/www.rockersphere.com.au
Aerosmith fans are crying foul over last-minute discounts to boost ticket sales for tomorrow's Forsyth Barr Stadium show.

It was confirmed yesterday fewer than 17,000 tickets had sold, dashing hopes of a sellout, 40,000-strong crowd touted when the five-band show was announced in February.

Dozens of messages have appeared on the stadium's Facebook page, including one from Anne Stansfield, who said she was ''really angry and disgusted'' by the ''unfair'' discounts. Her student daughter had ''dipped into her hard-earned savings'' to buy full-price tickets to the ''silver'' section of the playing surface's standing area, only to later discover discounted tickets to the same area on sale.

Upset fans warned they would no longer support events at the stadium, or would wait longer before buying tickets. Others defended the discounted tickets being offered.

The deals included half-price restricted-view tickets for $49 and access to the ''silver'' section of the pitch, together with an offer of some free food and drinks, for $99, down from $149.

Dunedin Venues Management Ltd chief executive Darren Burden distanced himself from the discounts yesterday, saying in a statement they were ''an initiative of the promoter and not supported by Dunedin Venues''.

DVML asked the promoter to withdraw the discount offers yesterday, except those for restricted-view areas, although those already sold would be honoured.

The discounted ticket offers were expected to be withdrawn overnight.

''We are committed to protecting the interests of our loyal customers who supported this event by getting in early and therefore requested the promoter remove the discounted tickets,'' Mr Burden said.

The Aerosmith concert was announced by Australian promoter McManus Entertainment, but was being organised by the company's New Zealand agent, Jacman Entertainment.

Jackie Sanders, the owner of Jacman Entertainment, told the Otago Daily Times the discounts were intended to fill gaps in ''cheaper'' areas that were difficult to sell.

They were not being offered for premium and gold sections, where fans paid $199 to be closest to the stage.

''Anyone who has paid and bought early has still got their premium seat. They are not going to be sitting next to somebody who has paid less than them.''

She could not say how many discounted tickets had sold, but insisted it was a normal tactic.

''I can't think of a single show in this country in the last two months that has not done some discounted tickets in the final week or two.

''People don't tend to moan as much in Auckland, possibly because it happens all the time and this is just the way it is - if you want your seat you get in early.''

Ms Sanders said discounts attracted those who might not otherwise attend, meaning more ''bums on seats''.

Ticket tales stood at ''over 16,000'' yesterday, although it was hoped that could rise to 18,000 by the time gates opened tomorrow.

Despite the earlier hype, her company had budgeted for a crowd of 15,000, she said.

''Everybody was saying: 'This will be a sellout'. We know the market. We haven't got too excited that it will sell out ... it's in line with our expectations to start with,'' Ms Sanders told the Otago Daily Times yesterday.

She believed Dunedin was doing well to attract such crowds, although people needed to be ''realistic''.

It would also be profitable for the promoters and DVML, although ''obviously everybody would have made a lot more money if we'd sold 30,000 tickets''.