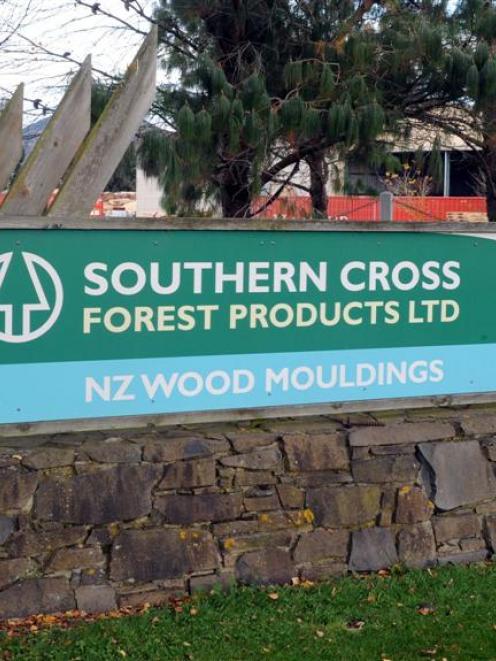 The Amalgamated Workers Union New Zealand has laid blame for the impending closure of Southern Cross Forest Products squarely at the feet of the Dunedin City Council and local forestry growers.

Yesterday, receiver KordaMentha announced 101 Otago-based staff at SCFP would be laid off progressively from mid-June.

Staff were told there was no interest in buying the company's South Island assets as a going concern and KordaMentha was attempting to sell the sites separately.

The decision affects 66 staff from the company's New Zealand Wood Mouldings plant in Mosgiel, 26 from Millstream Lumber in Milton, one from its Milburn site and the eight remaining staff at Rosebank Sawmill, in Balclutha.

Union spokesman Calvin Fisher said the attempt to sell SCFP as a going concern was doomed from the start because DCC-owned forestry companies were taking recent record-high market prices for its locally grown logs and getting maximum profit, rather than lowering prices to support the beleaguered local business.

''It was never going to be a runner if they [SCFP] couldn't secure the wood, and those forest owners who had the opportunity simply saw the short-term gain for the log price at the wharf.

He said market prices had grown so high because New Zealand was the only country in the world that did not place tariffs on its logs at the wharf to protect local industry-added value.

The industry had been burdened for decades because bought and sold cutting rights were usually held by large overseas superannuation funds which capitalised on the no-tariff profit margin.

Mr Fisher said the DCC needed to be ''put on the ropes'' over the issue.

''They'll tell you it's about the market forces. Where is the long-term strategy in that?

''How can people lose their jobs at a local manufacturing plant when the ratepayers have been told there's always a wall of wood to be felled and processed?''

He said New Zealand Wood Mouldings was established on the back of previous council decisions to plant pine trees around the city, with the promise of more jobs for ''ratepayers' children'' when the trees matured.

''But it's been bloody disappointing to hear current councillors and previous councillors comment that they have an obligation to take the market price.''

There was value in job retention, he said.

''The council need to have a good hard look at themselves, over long-term job benefits and added value in the region, because they are going to export hard-working people - [skilled mill workers] are going to leave the city.

''To think we've got forests right on our doorstep and we still can't keep plants running - someone has to be accountable for that.''

''It's a reasonable proposal, but that's what it means.''

Mr Cull said the loss of 100 jobs was a great loss for the local employment market.

''Unfortunately, this is the timber business and it is becoming too common around the country.

''It's another reason that we need to keep the effort up to diversify our economy and the employment types that we are able to offer in the Otago area,'' Mr Cull said.

City Forests chief executive Grant Dodson said the company had been a significant second-tier supplier to Southern Cross Forest Products for many years, and had increased supply to the mill since the receivership was announced. City Forests sold logs at market prices, he said, declining further comment.

SCFP was placed in receivership on March 3, and about 80 staff were made redundant in late April.

KordaMentha said it would help the 101 staff try to find other jobs.