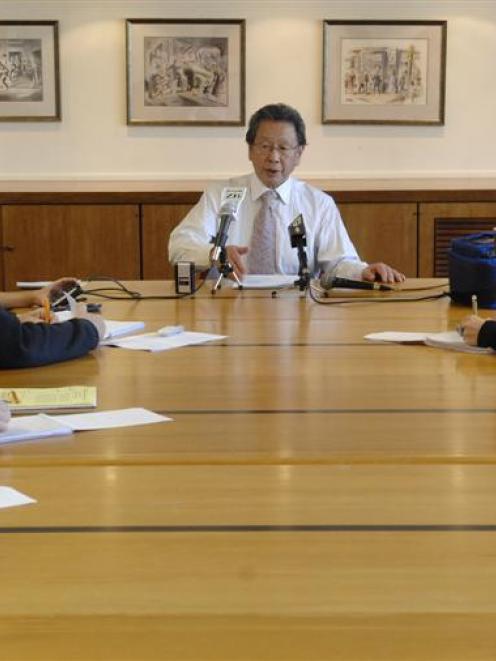 Dunedin Mayor Peter Chin announces the Government funding at a press conference yesterday. Photo by Linda Robertson
The Otago Stadium project got a $52.5 million shot in the arm yesterday after an 11th-hour decision by the Government.

A Cabinet meeting on Monday committed the Government "in principle" to underwrite up to $15 million of stadium costs.

That decision allowed the Otago Regional Council, at an extraordinary meeting yesterday, to meet its self-imposed deadline and commit $37.5 million to the project.

The contents of a letter from acting Rugby World Cup Minister Gerry Brownlee were announced by Dunedin Mayor Peter Chin at a press conference yesterday.

Mr Chin said he was "chuffed" with the Government's support.

"I am completely delighted that the Government has seen the worth of this project . . . It just shows the support for the project as it goes ahead."

However, Mr Chin said the letter - addressed to Carisbrook Stadium Trust chairman Malcolm Farry - contained no details of terms and conditions the Government might require in return for its $15 million underwriting of the potential shortfall in private-sector funding.

"The form of that underwriting is still a matter of discussion."

Mr Brownlee's press secretary, Stephen Parker, said the commitment was given "in principle" partly because of the deadline "the poor old regional council found itself under".

The terms and conditions had not been worked out "because of timing, really. I just don't think there's been sufficient time to contractually get that all organised", he said.

Mr Parker said the 2011 Rugby World Cup was definitely a factor in the decision, although when asked if the Government might require the stadium to be ready in time for the event, he said that was not written into the Cabinet decision.

"Essentially, Cabinet has signed off an agreement in principle to underwrite, with terms and conditions to be negotiated."

However, he believed the decision should be considered positively.

"It's an indication they are willing to put money in."

Regional council chairman Stephen Cairns said he was pleased to have a final decision on a project which, as well as having "significant synergies" with the University of Otago, would create employment for hundreds of people during the next several years.

The news of the Government support was relayed to Mr Cairns on Monday evening and put to councillors at an in-committee discussion yesterday.

Crs Stephen Woodhead and Duncan Butcher said they believed that was an assurance that condition 5 had been met and recommended the council resolve to include funding the proposed stadium in the long-term council community plan 2009-19.

Condition 5 sought an assurance of "likely Government or other sources' capital contribution of $15 million" to be confirmed by March 2.

Chief executive Graeme Martin said other conditions the council had imposed last month had been satisfied by the Dunedin City Council decisions of February 9.

Councillors voted 6-4 in favour of the recommendation to fund the stadium.

However, that was not before those who opposed the stadium project had their last chance to air their concerns, including Stop the Stadium president Bev Butler, who spoke in the public forum, calling for the council to put the project to rest for the financial health of the city and warning it may take legal action if councillors ignored ratepayers.

Cr Michael Deaker said he would ignore the idea the project had been given "some kind of permission" from the Crown.

Any thought of "putting a plastic roof" on another rugby field was "absolutely, definitely not a prudent financial decision", no matter who gave permission, he said.

Cr Gerry Eckhoff said the stadium, if built, would become an "albatross around the neck" of ratepayers and it would not create wealth for the region.

There had been no overwhelming mandate from the public for the project and he protested against the council "exercising monopoly rights" to tell ratepayers to contribute, when clearly they did not wish to do so, he said.

The council also did not yet know the terms and conditions of the underwriting.

Cr Bryan Scott said there was no doubt the underwriting was a boost to the project, but the "devil was in the detail" and the reason it was needed was that the private sector had not delivered on funding.

Approached for comment after yesterday's decision, Ms Butler said the organisation was "sickened by this cynical exercise in power".

She believed the regional council did not have the mandate to make its decision and asked if the Government would be willing to underwrite "the inevitable cost blowouts and operating losses".