Hotel submissions: 92 against, 16 for 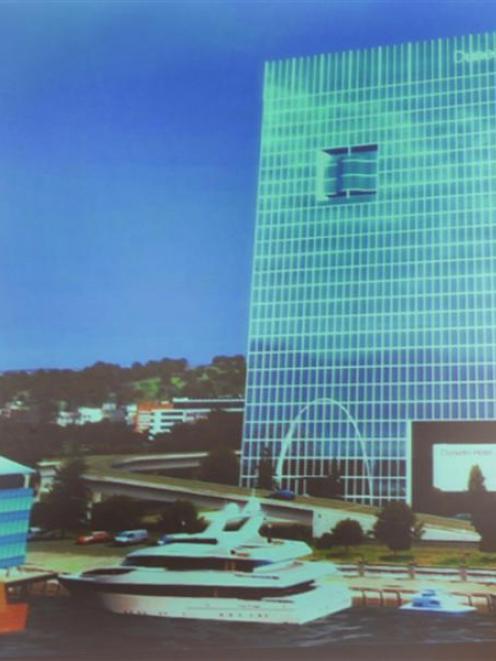 Artist impression of a new 5 star hotel proposed for the Dunedin waterfront. Photo by Craig Baxter.
Two opposing views of Dunedin's future are about to collide over a planned $100 million waterfront hotel.

Critics of the planned 28-storey hotel have flooded the Dunedin City Council with submissions, arguing the building would tower over its surroundings and the proposal is an attack on the heritage fabric of the city.

Supporters have also spoken out, urging the council to roll out the red carpet by granting consent to the project.

Council resource consents manager Alan Worthington said up to 130 submissions had been received, and still more were coming in before the Friday deadline.

By late yesterday, 110 of those had been processed, 92 of them opposed to the project, 16 supporting it and two remaining firmly on the fence.

Mr Worthington said the numbers received to date - while still dwarfed by submissions on the Forsyth Barr Stadium plan change - was a record for a notified resource consent application.

The hotel plans, first unveiled in May, include 215 hotel rooms, 164 apartments, restaurants, bars and a swimming pool, within what would become Dunedin's tallest building.

The hotel would be built on vacant industrial land, between a railway line and a vehicle overbridge, and paid for by Chinese developers who are yet to be named.

However, it appeared the battle lines were already being drawn when the Otago Daily Times viewed submissions yesterday.

Opponents such as Sean Ross, of Dunedin, argued against the "monstrous tower", warning it would repeat the mistakes made in other centres and be "completely out of place" in Dunedin.

"I will cry for this city of character, history and astounding architecture to see this giant, characterless, non-entity bling tower jutting out of the harbour."

"I would think of it as an unmoveable knife into the heart of my city."

However, supporter Joanne Galer urged the council to approve the hotel and help give Dunedin a "more cosmopolitan, go-ahead and exciting look".

That would send a message Dunedin "keeps it's beauty but it also welcomes the different and the bold", she said.

"We should not turn business away merely in favour of a few ardent - and usually older - letter-writers who believe their own personal idea of aesthetics trumps all else."

Her submission was backed by Mark Taylor, who argued the hotel would put an underutilised part of the waterfront to good use, and Peter Boston, who said it could encourage further development.

However, Ulla Reymann said the hotel would "dominate" nearby heritage buildings and deliver a blow to the city's image, destroying any economic benefits that might arise from the hotel.

Ulf Uchida said the hotel would be built on reclaimed land with no easy access to the central city, and "right in front of everything else".

Patricia Saunders agreed, saying the result would be like standing behind a tall person at an event - "Great for the tall person and impossible for those behind."

Michael and Anne Cloonan pointed to the Forsyth Barr Stadium while warning against allowing further "misguided" waterfront developments, while Michael Thompson worried the hotel would block waterfront views for tenants in the heritage building he managed at 23 Vogel St.

• Council staff have scheduled a four-day public hearing, to begin in early December. Mr Worthington said it was not yet known whether that would be enough time.