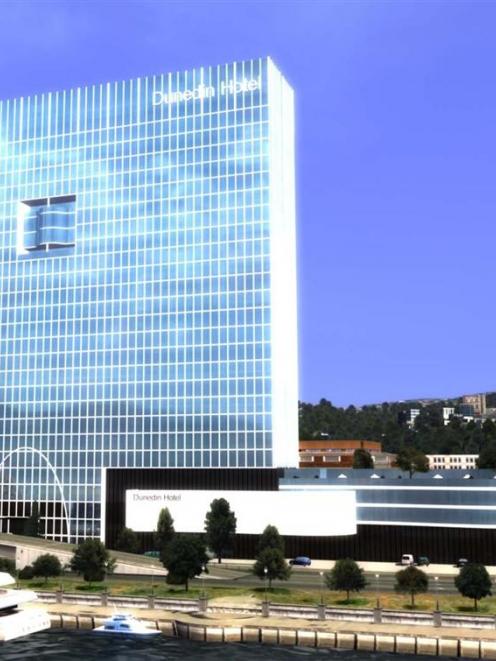 An image of how the Dunedin Hotel might look if built. Image by supplied.
The fate of Dunedin's proposed $100 million waterfront hotel could turn on a legal argument about its height.

A Dunedin City Council hearings committee adjourned on Thursday after four days of arguments, expert evidence and public pleas on the 28-storey hotel, which Betterways Advisory Ltd wants to build at 41 Wharf St.

Amid worries about pedestrian access, transport disruption, noise, shading and wind, the main point of contention to emerge has been the proposed building's towering height.

Submitters argued it would dominate its surroundings and disrupt views.

However, a legal argument by Betterways and the company's expert witnesses - rejected by lawyers and experts opposing them - could be crucial to the debate.

Betterways hoped to build the 96m-high hotel on industrial land, meaning the building's mix of commercial and residential activities - including restaurants, apartments and bars - would not comply with district plan rules, a council planner's report concluded.

However, Betterways' solicitor, Phil Page, last week argued an industrial building of the same height as the proposed hotel would be allowed on the site as of right, without a resource consent, under a ''permitted baseline test''.

That was because the industrial 1 zoning of the land had no height limit placed on it.

That meant the argument was over whether a hotel - rather than a tall building - was the problem, unless the committee considered the proposal for such a tall industrial building was ''fanciful'', he believed.

The report by council planner Lianne Darby, which recommended consent be declined, concluded it was, and therefore the permitted baseline test did not apply.

''The proposed development is unlike anything existing or anticipated for this site or area ... the expectations for the site are still to be framed within the context of construction that is non-fanciful."

However, Mr Page argued that was ''misguided'', saying an international logistics hub for Maersk or P&O were examples of large industrial buildings that could be built on the site.

''The proper approach ... is not to try to predict whether someone might build an industrial building of this scale, but rather to consider whether to apply the permitted baseline or not."

Betterways' consultant planner, Don Anderson, told the committee to turn its attention to district plan rules ''rather than to personal emotions''.

Under that assessment, there would be ''little, if any'' physical impact arising from the hotel's construction that was more than district plan rules allowed, he claimed.

There would be shading from the hotel, but the district plan only controlled shadows from buildings falling on a residential zone, Portsmouth Dr or Dukes Rd, or in Sawyers Bay - not from 41 Wharf St.

Disruption to views caused by the hotel's height was also not an issue that could be considered by the committee, Mr Anderson argued.

He acknowledged there ''will be a loss of existing view shafts'' from Waverley, City Rise and upper floors of the heritage warehouse precinct, ''but these views are not guaranteed by the district plan''.

The district plan's ''extensive'' rules controlling the external appearance of buildings around the city also did not apply to 41 Wharf St, he said.

That meant ''little, if any'' weight could be given to the submissions on the building's height or appearance, while shading and loss of views were not issues of concern for the hotel under the district plan.

However, solicitor Alistair Logan, acting for the Otago Regional Council, which opposed the hotel's development, took a different view.

Claims there were no adverse effects from the hotel, because no height limit could be applied, were ''not tenable''.

It was up to the committee to decide if the permitted baseline test - which, if applied, would exclude height as an issue - should be applied, he said.

The hearing will resume on December 17 for a second round of public submissions, expected to take up to three days.

The committee will then begin deliberations on all the evidence - including the legal issue and other considerations - but a decision is not expected until early next year.