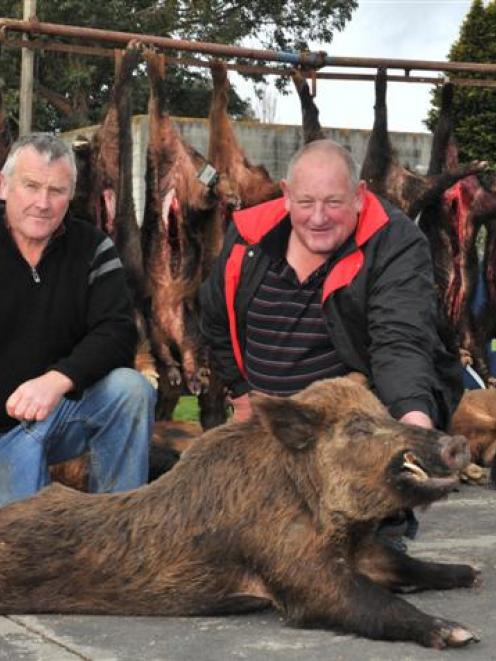 Taieri club pig hunters Kevin Meehan (left) and Brian Flett celebrate with their 65.4kg boar, which was the heaviest caught and had the competition's largest tusks, each protruding about 9cm. Photo by Jane Dawber.
Taieri pig hunters are again bringing home the bacon through the resurgence of an annual club event.

Judge and former club member Bill Westwood, of Geraldine, said a group of new, younger members decided to revive the annual competition, which had ceased some years ago.

Fresh blood was just what the club needed, he said.

As an independent judge, Mr Westwood was impressed with the results.

"Normally, you get about 30% of entrants bringing in a pig, so for a field of 72 hunters you would expect just over 20 pigs. Therefore, 29 is actually quite good," he said.

A member of the national pig hunting association, Mr Westwood was one of a few South Island judges who travelled to events as an independent authority.

"That way, organisers don't get flak from competitors about playing favourites," he said.

Outram hunter Brian Flett, together with Kevin Meehan, had the heaviest boar at 65.4kg, which was rounded up by dogs and shot in the Hindon area.

Its tusks each protruded about 9cm and were the largest overall.