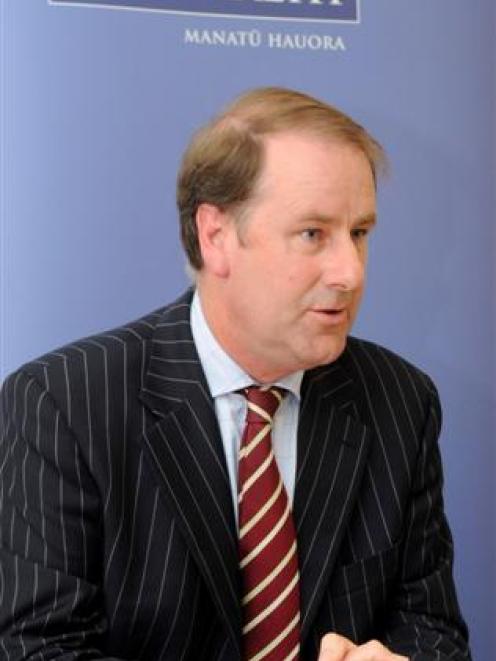 Acting Director-general of Health Andrew Bridgman speaking in Wellington on Wednesday.
Details of the cost of revamping the South Island neurosurgery service are hazy, but it is not expected it will reach the $3.1 million extra it would have cost to set up a one-site model in Christchurch.

The $3.1 million estimate features in the report of the expert panel and is calculated to be the added cost in the first year of a Christchurch-only proposal.

No costings have been given for the new plans, which involve retaining four neurosurgeons in Christchurch and recruiting three for the Dunedin site, two of them University of Otago appointments who would have research and teaching roles as well as their clinical work.

Acting Director-general of Health Andrew Bridgman said yesterday further costings needed to be worked through with the National Health Board and the district health boards.

He did not expect, however, the costs would be significantly different from the existing services.

One cost the panel does spell out for the cash-strapped Southern District Health Board is the $600,000 needed for equipment for image-guided surgery.

This equipment is being hired as required at significant cost, which is not a satisfactory situation long term, it says.

"This is a fundamental piece of equipment for a functioning neurosurgical service and the Southern DHB would have to commit to purchasing it in order to attract surgeons," the report states.

No estimate has been given for the costs associated with the setting up of the eight-member governance board, but these costs will be met by the National Health Board rather than DHBs.

It is proposed that payment for neurosurgery services through the two district health boards will change to a population-based funding model.

Under the existing system, there can be friction between boards about how much money they receive through the "inter-district flows" (IDF) system, which estimates the pay boards receive for the work they do for patients out of zone.

The expert panel report says small boards claim they are being forced into financial hardship through this system while larger boards often claim they do not receive enough funding from other boards to compensate for high-cost services which might treat low numbers of patients.

This could lead to boards concentrating on providing expensive services to their own populations rather than treating people from elsewhere who also needed it.

For a whole of South Island service which is being established and which needs to overcome parochialism and bad feeling from the past, the IDF system is not helpful, the panel says.

As well as the move to population-based funding, the panel suggests the governance board should manage the high-cost budget items for the service.

While there has never been an argument the changes to the service are being done on the basis of cost, there is criticism that earlier reports did not include a cohesive financial analysis.

In its deliberations, the expert panel found the time and cost of air transport had been underestimated in earlier one-site estimates.

Canterbury's estimates had also been based on an assumption only patients with a three-day stay or longer would go to Christchurch.

This presumed a far greater input from general surgeons in Dunedin than the panel considers realistic.

The panel report says these costings were conservative as they did not include any capital allowance for increasing theatre ward, intensive-care unit or radiology capacity in Christchurch, nor did they include any additional first specialist assessments or follow-up costs associated with specialists travelling to Dunedin.

The panel concedes it has not had time or resources to undertake an in-depth cost analysis of the effect on patients of the one-site model, but it notes the costs for families travelling from out of the Christchurch area would be unaffordable for people on low incomes or benefits.