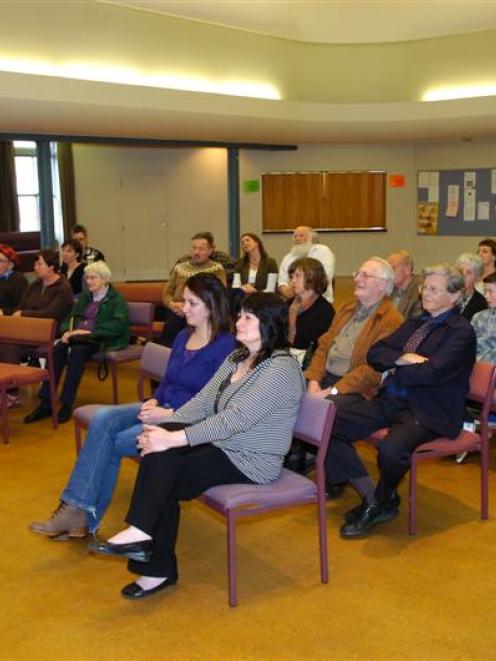 An audience of 28 people hears the Dunedin mayoral candidates in the second of two forums sponsored by Presbyterian Support and First Church, at Burns Hall yesterday. Photo by Jane Dawber.
Smiles rather than spreadsheets were the focus of the latest Dunedin mayoral forum, when candidates were asked yesterday how they might contribute to the happiness of citizens.

The second in a series of two mayoral forums sponsored by Presbyterian Support and First Church began with each candidate asked to answer a question sent to them earlier by organiser Dennis Povey.

The candidates were told by Mr Povey: "It's been said that gross national happiness is much more important than gross national product; that the greater the difference in wealth between the richest and the poorest in a society the lower the wellbeing of the whole community".

"How, as mayor, will you be seen to hold the happiness and wellbeing of the Dunedin community as your highest priority?"All seven candidates attended the meeting at Burns Hall, and little new came from the event, apart from some appearing a little scratchy after weeks of campaigning.

Mayor Peter Chin told an audience of 28 people happiness for him would come on the last day of voting, when the future mayor would be chosen.

"I will be happy because this will be over," he said.

Jimmy Knowles said "needs" like food, clothing and shelter were essential for happiness, Lee Vandervis said all residents should be given "equality of opportunity", and Cr Dave Cull said a plan for the city's future, decided both by the council and the community, was most important.

Kevin Dwyer said working with the Government to close the gap between rich and poor would make a difference.

Aaron Hawkins called for a "genuine progress indicator" which measured citizens' welfare rather than just the economy, to be used to measure how well Dunedin was doing.

Olivier Lequeux said well kept parks and good public transport were more important than building "castles" or the Eiffel Tower, though he said that had been good for Paris.

Mr Chin said the council's work providing services for both rich and poor, from water and waste, to museums and art galleries, helped provide people a community in which they could enjoy the happiness they created for themselves.

During public questions, candidates were asked about their attitudes to sustainability, debt, and whether they planned to keep water services within the council.