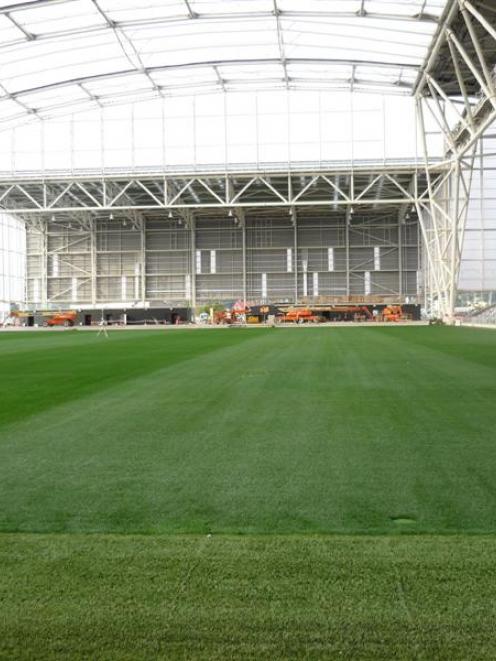 Millions of dollars of ratepayers' money is set to be poured into shoring up Dunedin's struggling Forsyth Barr Stadium, but the city's crumbling coastal defences will also receive a boost, the Dunedin City Council has signalled.

The decisions - subject to final confirmation - came as councillors considering the 2014-15 draft annual plan yesterday sought to keep the forthcoming rates rise below 3%.

However, supporters of a long-awaited South Dunedin library will have to wait a little longer after councillors balked at the cost of a temporary ''shop front'' library suggested as a stop-gap measure for the suburb.

Instead, councillors voted to spend $95,000 on a new interim risk management plan as part of an ongoing push to hold back pounding surf and coastal erosion at St Clair.

The money would pay for ongoing monitoring and maintenance of the sea wall until plans for a permanent fix could be discussed in more detail next year.

However, Cr Neville Peat was quick to warn yesterday's meeting at least one of the long-term solutions could be contentious, as construction of an offshore groyne - designed to dissipate incoming waves - would ''ring alarm bells'' for surfers.

The idea was among potential options canvassed for the council by Opus International Consultants, but no proposals were yet on the table, council infrastructure and services general manager Tony Avery stressed.

The discussion came after councillors earlier voted to pump another $3.6 million from council savings into Dunedin Venues Management Ltd, the company running the stadium, in the coming financial year.

The decision - accepted reluctantly by some councillors but opposed by Cr Lee Vandervis - included a one-off, $2.21 million contribution to repay DVML debt.

It also included a $715,000 increase in the annual ratepayer contribution to the stadium company and a continuation of the $725,000 annual payment originally intended to repay stadium debts over three years.

Those payments would together cover DVML's forecast $1.440 million loss forecast for 2014-15, while work continued on a major review of the stadium's financial and operating models, the results of which were expected midyear.

However, DVML chief executive Terry Davies tried to put the losses in context yesterday, telling councillors an unpublished analysis showed stadium events had contributed $45 million to the Dunedin economy since 2011.

The full report was expected to be published with results of the stadium review, he said.

Councillors voted to approve the extra funding despite the barbs of Cr Vandervis, who criticised DVML's performance.

''They are supposed to be a council-controlled organisation, and are completely out of control,'' he said.

The council also voted to continue the Warm Dunedin home insulation scheme for another year, prevent new tenants in council flats from smoking inside, and investigate alternative heating sources for Moana Pool.

However, an earlier plan for a temporary ''shop front'' library in South Dunedin was shelved while work on a permanent facility continued, after council staff confirmed it could cost $360,000 a year to run.