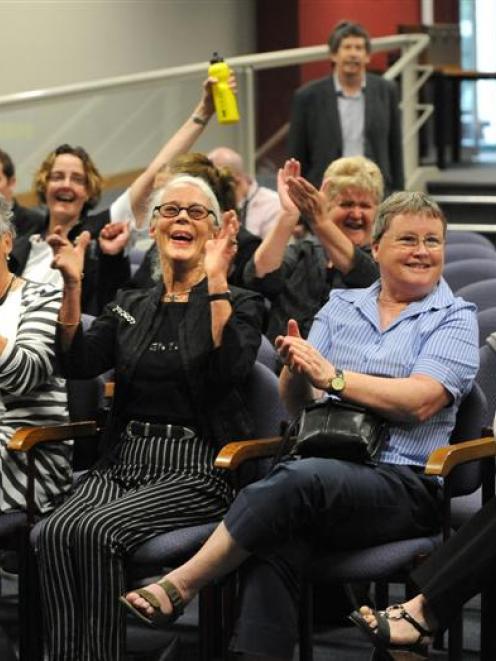 Neurosurgery campaign supporters (from left) Kate Burton, Jane Nimmo, Barbara Brinsley and Lorraine Lobb celebrate yesterday's positive news. Photo by Peter McIntosh.
It was delight not doom for Dunedin neurosurgery campaigners yesterday with the news the service in the city will be enhanced rather than dropped.

In its 84-page report outlining the new model for South Island neurosurgery provision, the South Island Neurosurgical Service Expert Panel was explicit in its view of the role played by the public of Otago and Southland.

Public health providers "ignore the community view at their peril", the panel stated.

"They raised the issues that caused us to look critically from a clinical perspective at the services involved."

The report discards plans for a one-site service in Christchurch, instead opting for a single service model with at least three neurosurgeons in Dunedin and four, initially, in Christchurch.

Two of the Dunedin surgeons would be University of Otago appointments, while the third would have an interest in spinal surgery and work across the public and private sectors.

The panel sees the Dunedin part of the service as New Zealand's academic neurosurgical unit, with research links to the major neurosurgical research centres of excellence around the world.

The no-nonsense report backed the view of thousands of Otago and Southland people that service changes which knowingly increased deaths or less favourable outcomes for patients could not be supported.

Nor did the panel accept the view that Otago and Southland campaigners were political, emotional and ill-informed.

Much of the public comment was well informed and thoughtful, it said.

The panel received 2256 submissions from 2193 members of the public, along with 21,332 Otago Daily Times coupons supporting the retention of the service in Dunedin.

It said much of the emotion could have been avoided if the South Island health authorities had handled the issue better and sought community feedback in a more structured way.

"It is important to have real community involvement in our planning processes."

Panel members had not underestimated the significant responsibility South Island communities placed on them and it had been a privilege to work though the process with both communities and clinicians.

The panel, which also involved Adelaide neurosurgeon Glenn McCulloch and consumer advocate David Russell, said Canterbury had grossly underestimated the number of patients requiring emergency air transport to Christchurch if there were no Dunedin neurosurgery service.

The idea that general surgeons could be trained to provide emergency neurosurgery was also rejected as one which was not supported by international guidelines or practice.

Concerns that there was "no evidence that any serious planning" had been done to manage the extra cases in Christchurch if the Dunedin unit closed, and that the numbers of patients were seriously underestimated, were raised in the report.

Christchurch's intensive care unit was already under serious pressure and its waiting list for MRI scans was 1300 people.

The absence of a helipad on the hospital site was a major issue for patient transfer.

While many of these issues might be dealt with by the construction of a new hospital, completion of this was at least five years away.

It was unfair to say the one-site proposal had been motivated by lifestyle reasons for surgeons, but rather the option had been promoted to avoid the difficulties inherent in providing emergency cover in the last few years, the panel said.

It was also an opportunity to expand sub-specialisation in Christchurch.

Although Canterbury DHB senior management and the board supported neurosurgery head Martin MacFarlane's vision for a one-site model, they had not done the necessary work to ensure it could happen.

Mr MacFarlane had a justifiable belief a two-person service in Dunedin was unsustainable, something the panel agreed with - a three-person service was the minimum acceptable.

The panel praised the expertise and passion of people delivering neurosurgery services in both Dunedin and Christchurch but expressed disappointment that "somehow the same level of leadership, clinical management and governance" had not been shown at a South Island-wide level.

"A deep sense of parochialism undermines the development of this South Island-wide view.

This relates not just to neurosurgery but to all services ..."

The panel hoped its approach might set an example for South Island health-sector leaders.

Members saw the appointment of Melbourne academic and neurosurgeon Prof Andrew Kaye - nominated to chair the governance board - as necessary for the development of the academic neurosurgical unit.

Speaking generally of the future of the whole service, the panel warned that this is "the final opportunity for all parties to make this service work as a single regional all-of-South-Island service".

If this opportunity was not taken, the panel recommended the service be removed from South Island boards and operated by another organisation, probably a North Island board.

At least three neurosurgeons in Dunedin.

Appointment of neurosurgery professor in Dunedin.

Governance board headed by Australian.

Up to two years before full implementation.