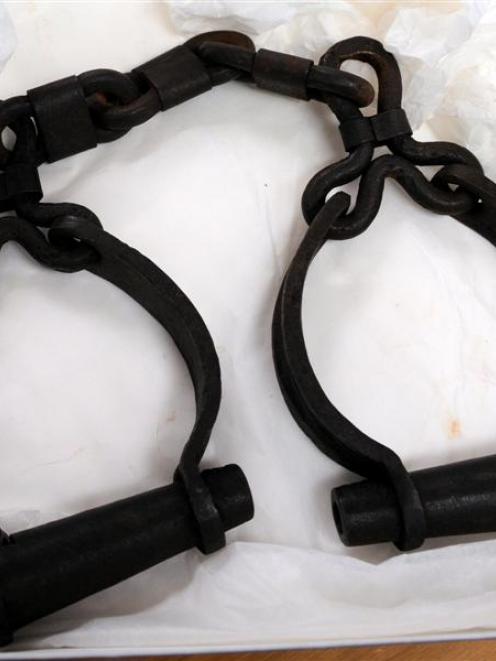 The shackles found in a Portobello Rd cave. Photo by Craig Baxter.
Dunedin Mayor Dave Cull says he has ''no regrets'' about stepping in to buy leg irons destined for auction, despite new evidence they were used to hold camels, not Maori prisoners as had been believed.

However, the conclusion by Toitu Otago Settlers Museum staff has prompted Mr Cull to call on the seller - Dunedin man Steve McCormack - to ''examine his moral position''.

The council spent $3900 on the shackles in March, preventing them being sold on the open market, and Mr McCormack should now consider refunding ratepayers' money, Mr Cull said.

''He should reflect on that,'' Mr Cull said.

But Mr McCormack rejected the idea, insisting he was ''no expert'' but the items were genuine historic artefacts.

It was a case of buyer beware for the council, he believed.

''You buy something - you don't get a refund.

''If you go to auctions . . . it's a bit like going to the casino, I suppose, but at least you can come out of there with something.''

However, Mr McCormack insisted he had never explicitly linked them to the area's Maori prisoners, despite saying in March there was ''no question'' they had been used to restrain prisoners inside the caves.

''I said they came from the caves over there - and then everything went haywire,'' he said.

''I put them up for sale as a pair of leg irons. He [Mr Cull] stopped the auction - he took responsibility for it by doing that.''

The comments came after plans to sell the leg irons at Hayward's Auction House were revealed in March, prompting concerns an important piece of history could be lost.

Mr McCormack claimed to have found them inside a Portobello Rd cave in the early 1970s, near where Maori prisoners from Taranaki were forced to labour between 1869 and 1881.

Some historians believed prisoners could have been held for short periods inside a Shore St cave, on the opposite side of the Andersons Bay inlet.

However, Toitu's follow-up report concluded the Portobello Rd cave was used throughout the 19th century as a powder magazine, storing explosives, and would not ''under any circumstances'' have housed people.

The cave was later used as storage space leased to boat clubs throughout the 20th century, the report said.

''Simply put, his account is not credible,'' the report concluded.

Instead, the leg irons were believed to be of Middle Eastern origin, most likely forged in the early 20th century, and were suspected to be camel hobbles.

They could have been brought back to Dunedin by soldiers returning from World War 1, the report suggested.

''They would fit very well for a camel, or likewise to a Clydesdale-sized horse's leg,'' it said.

Mr Cull said he did not regret buying them ''given the uncertainty'', but ruled out any legal action, saying the cost would be more than the shackles were worth.

Mr McCormack insisted he had not tried to deceive anyone.