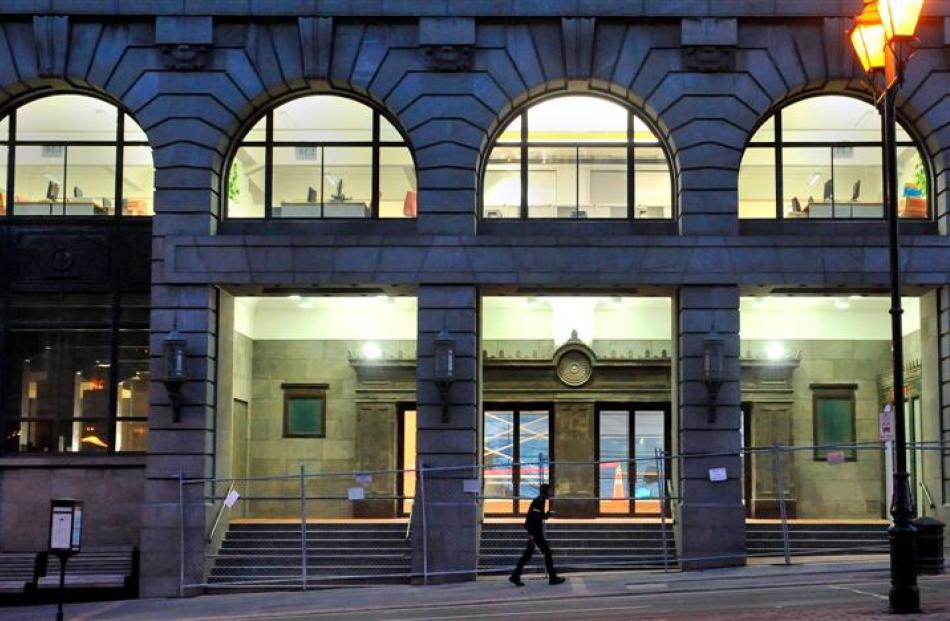 A pedestrian walks past Dunedin's former chief post office building last night. About 145 staff from Silver Fern Farms are expected to start work in the first two floors of building this morning. Photo by Craig Baxter.

The return today of a commercial tenant to Dunedin's former chief post office building for the first time in more than 15 years marks a significant milestone in the restoration project.

About 145 staff from Silver Fern Farms are expected to start work in their new headquarters - occupying the first two floors of the partially-restored building - this morning.

The company and contractors spent Otago Anniversary weekend moving in, installing computer systems and making sure all was in readiness for staff after the ground and first floors were renovated for their purposes.

Silver Fern Farms chief executive Keith Cooper could not be reached for comment yesterday, but there were obvious signs of activity within the building and the company's flag was flying from the building's flagpole.

It was the first time the building had been home to a permanent tenant since closing its doors in 1997, building owner Geoff Thomson, of Distinction Hotels, said.

The reopening marked a significant milestone for the restoration project, with more tenants, a three-level car park building and, eventually, the 120-apartment four-star-plus Distinction Dunedin Hotel, all to follow.

While the presence of Silver Fern Farms staff on lower levels would make the second stage of the project more complicated, it was nevertheless pleasing to have them in the building, Mr Thomson said.

''They are a great fit for the building and it's going to be really nice having a significant tenant in the building. They're really excited about the space, as we are to have them.

A second tenant, Multipeak Health and Fitness, was expected to move in to its second floor premises within weeks, which left only one vacant space for a third tenant, also on the second floor, he said.

Mr Thomson expected work on a three-level car park building next to the building, on Bond St, would soon follow.

Work had also begun on converting the remaining floors for Mr Thomson's planned hotel, although ''it'll be finished when we get there'', he said.

Retrofitting activity had been ongoing for the past six months, but had become more obvious as the car park site was cleared for tradesmen's vehicles, he said.

''[Then] people realised how many people have really been working on this.''

Work to date looked ''really sharp'' and included a raised floor to hide pipes, wires, air conditioning and sprinkler services, to protect views of the ''the lovely ornate ceilings'', he said.