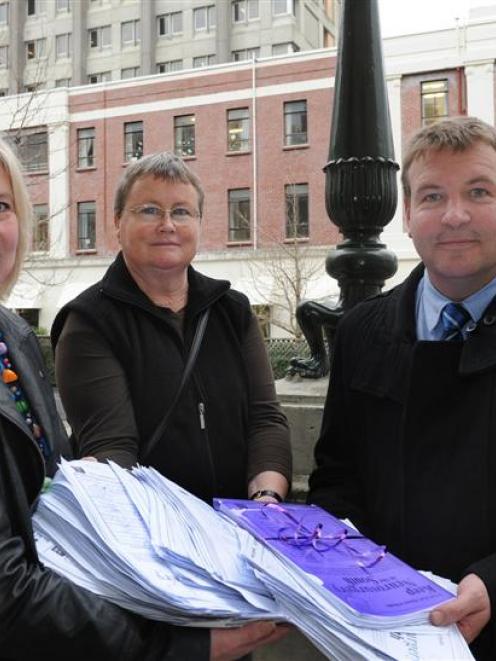 New Zealand Nurses Organisation industrial adviser Glenda Alexander (left), Nurses Organisation area organiser Lorraine Lobb and Otago Daily Times editor Murray Kirkness, with some of the first pages of the save southern neurosurgery petition that were counted yesterday. Photo by Stephen Jaquiery.
Organisers of a petition to save southern neurosurgery expect about 20,000 people - possibly more - to have put their name to the campaign to keep the vital service in Dunedin.

The first count of early returns late yesterday showed more than 17,000 people had signed petition pages collected by the Otago Daily Times, The Southland Times, the New Zealand Nurses Organisation, and members of the community.

The newspapers still had many more pages to count last night and were keenly anticipating news of the many hundreds of pages of signatures that had yet to be handed in which had been collected by people and businesses across the region.

Otago Daily Times editor Murray Kirkness and The Southland Times editor Fred Tulett expected to see at least 20,000 signatures by the time all the signatures were tallied.

Mr Kirkness said the campaign had stirred the passions of southerners determined to keep the life-saving service where it could benefit friends and family the most.

"People see this campaign is about supporting something that saves lives," Mr Kirkness said.

"It's shown us that people care about retaining crucial services in the South.

"The two competing newspapers worked together on this petition because we recognise this is a huge issue - and the people of the South obviously agree with us."

Mr Tulett said a Southland woman had collected about 3500 signatures. Another 3200 were collected when Otago unsuccessfully challenged Southland for the Ranfurly Shield last weekend.

Mr Kirkness urged anyone with petitions to post or deliver the forms so they arrived at the ODT before 5pm on Tuesday. They will be collated and taken to Wellington soon afterwards.