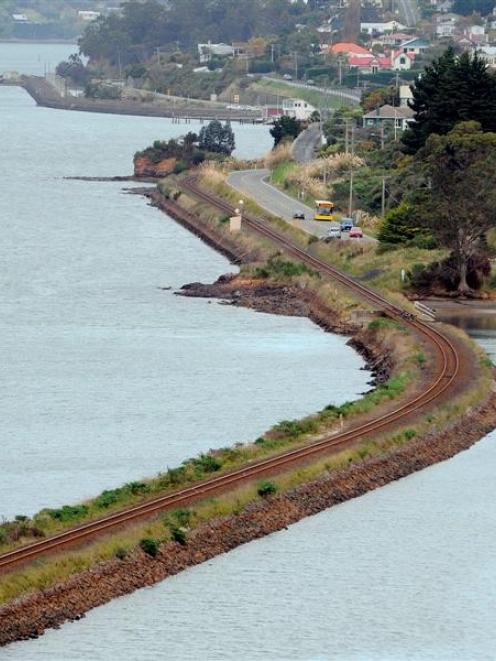 Supporters of the project are remaining upbeat, despite the multimillion-dollar extension of the shared pathway from St Leonards to Port Chalmers being years from completion.

That could see design work included in the 2012-15 National Land Transport Programme's funding allocation, as money was still available.

If successful, the construction stage would be considered for inclusion in the next regional land transport plan, covering the 2015-18 period, he said.

Construction was expected to cost ''several million dollars'', but the exact timeline to complete the project was not known, he said.

About 5500sq m of harbour would be reclaimed as part of the work, to provide sufficient room for the shared pathway and to improve the railway line's alignment, he said.

That was likely to involve a ''small amount'' of reclamation just north of the St Leonards Yacht Club.

Another two areas in Sawyers Bay would be reclaimed, tapering from 0m-16m wide over about 300m; one opposite the railway overbridge and one nearer to Port Chalmers, he said.

The cycleway would be built between the existing highway and the railway line, which would be moved further out on to the reclaimed land as part of the project.

''Any reclamation area must consolidate before the rail line can be relocated on to it, but the amount of consolidation time required is unknown until more work is done.''

That would provide space for the cycleway and walkway, and allow the existing railway alignment to be improved, she said.

''The existing alignment is still part of the original Dunedin-Port Chalmers railway construction, built in 1872, and poses particular problems at the Mussel Bay end due to the tight curves and poor access.''

The update came after Dunedin city councillor Andrew Noone - the Waikouaiti Coast-Chalmers ward's representative and a Chalmers Community Board member - raised the issue at last week's full council meeting.

Cr Noone told the meeting some cyclists were still ''taking their lives in their hands'' by mixing with heavy trucks on the highway.

Completing the cycleway to Port Chalmers remained one of the main talking points at a recent public meeting in Port Chalmers, and ''people want to know when it's going to happen'', he said.

''It would be hugely beneficial to be able to have some certainty that we could share with the community.''

Speaking later in the week, Cr Noone told the ODT he had since received an update from NZTA staff, and was happy progress was continuing.

''Clearly, the construction funding isn't fully committed to at this point, and that's obviously a decision made in Wellington ... That's clearly a pretty important step.''

Spokes Dunedin secretary Robert Thompson agreed, saying the existing cycleway and walkway was a ''very popular project'' on weekends and for weekday commuters.

''Obviously, there's a pause at the moment. We had it completed out to St Leonards quite a while back, and now there's been nothing done since then.

''I think a lot of people are disappointed it hasn't been happening any sooner. Hopefully, it will get into the next funding round ... I certainly hope they do and we'll certainly be supporting that in any way we can.''

Chalmers Community Board chairman Steve Walker said the project remained a ''top priority'' for the board, and he was ''certainly encouraged that it also remains a priority for NZTA''.

''I certainly hope that's [design] approved. That will show the many, many, many people of the West Harbour the various agencies truly are serious about the path's completion, because I think a lot of people get frustrated about the perceived lack of progress.

''I really hope that funding application that's being considered now is approved.''

The potential multimillion-dollar price tag ''is not really that much money ... when you lay it alongside the fact that it potentially may save people getting killed on what still remains the busiest per-capita state highway in New Zealand''.