South lauded over performance of stadium as sporting venue 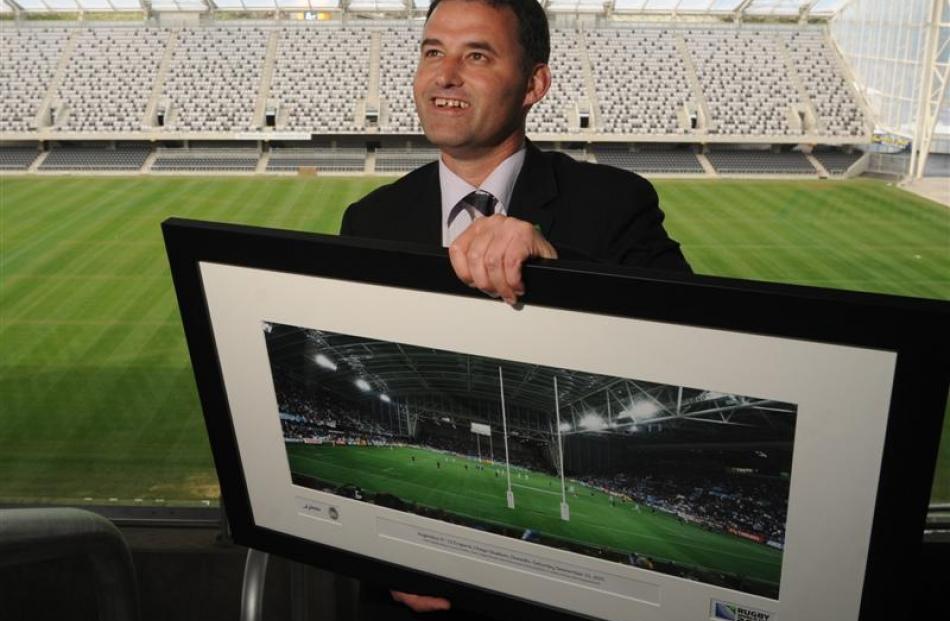 Rugby New Zealand 2011 tournament services general manager Nigel Cass at Forsyth Barr Stadium, with one of three framed photographs presented to Dunedin and the region for its part in hosting the tournament. Photo by Peter McIntosh.

The organisation behind the 2011 Rugby World Cup has praised the South for its involvement in the tournament.

Rugby New Zealand 2011 tournament services general manager Nigel Cass, who was had been involved with the project since late 2004, visited Dunedin on Monday to thank those behind the event.

The organisation was proud to have delivered on their promise of a "stadium of four million", and winning over the sceptics who doubted the country had the infrastructure to host a world-class tournament, he said.

"It was critical we took games and teams to the top of the north to the bottom of the south, and New Zealand communities and facilities stood up and proved themselves as being truly world class," he said.

The tournament presented its share of challenges with organisers prepared with contingency plans even following the Christchurch earthquake, but "that was just unprecedented for a major event".

"That is one of the lingering regrets that Christchurch couldn't be part of this, in a game sense."

While it was disappointing no quarterfinals were held in the South Island, the reality following the loss of AMI Stadium in Christchurch was "we needed to go to a venue with at least the capacity of Dunedin and the infrastructure to host the fans".

Organisers always knew the completion of Forsyth Barr Stadium was "going to be tight", and the effort by Dunedin Venues Management Ltd to get the venue up and running was fantastic, he said.

The performance of stadium was one of the highlights of the tournament, and "it will be one of the go-to venues for New Zealand fans and the fans of touring teams".

"You have one of the world's best sports facilities."

Rugby New Zealand 2011 was now down to a skeleton staff, and would report to the IRB in February about the tournament, which in terms of ticket sales was $500,000 ahead of budget.

Mr Cass presented the Dunedin City Council, Otago Rugby Football Union, and DVML with framed photographs of the opening tournament match at the stadium, and praised the Dunedin and Otago communities for supporting the tournament.