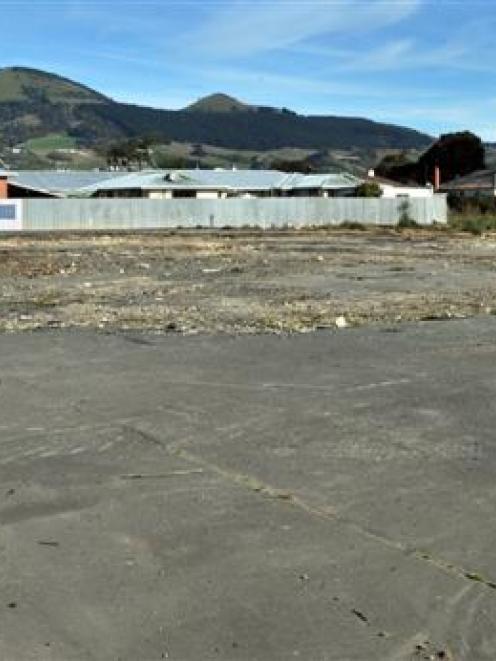 The site for the Mosgiel Countdown. Photo by ODT.
A Dunedin City Council planner remains opposed to a proposed $15 million Mosgiel supermarket, despite several changes to the plans.

The proposal for a new Countdown in Gordon Rd, which was predicted to add 48 jobs, initially prompted concern among Mosgiel residents.

Some concerns had been eased after the company committed to changes, which included reducing the building's height, limiting opening hours and restricting servicing trucks to entering and leaving the building from Gordon Rd.

''I believe that there are many gaps in the information provided to fully ascertain the proposed effects of the supermarket.

''Without further clarification of those matters, I still consider that it is difficult to determine the extent of the adverse effects, or how meaningful any potential benefits will be with respect to the revised proposal.''

Countdown had offered to reduce proposed hours of operation from between 7am and 10pm daily to between 8am and 9pm, but Ms Young did not believe the offer went far enough.

''I would recommend that if the committee was of a mind to grant [consent], that opening hours between 9am and 6pm would be more suitable in the existing residential environment.''

The report was not all bad for Countdown, with Ms Young saying some of the proposed changes would result in a ''significantly better outcome for the surrounding residents''.

Her planning report is one piece of evidence to be considered by Crs Andrew Noone, David Benson-Pope and Kate Wilson at a hearing in Mosgiel next week.

The councillors could choose to go against her advice. A Countdown spokeswoman said the company remained optimistic about progress for the site and was ''committed to investing and employing in Mosgiel''.

''We've worked hard to put forward a plan for the Mosgiel site that will fit in with the community and have had extremely positive and constructive engagement with local groups such as Positively Progressive Taieri to achieve this.

''It's worth noting that since the pre-application meeting with submitters on April 1, 2015, we have made 15 significant amendments to our plans.''

The company had provided as much information as it would with any other consent proposal and responded to all requests for further information from the council, the spokeswoman said.

''We'll continue to work with the council to achieve an outcome for Mosgiel and will await the outcome of next week's resource consent hearing.''