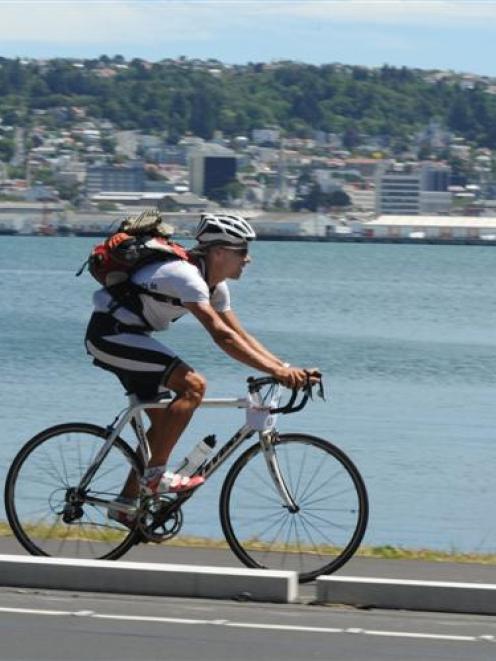 A cyclist on the cycleway near Vauxhall. Photo by Jane Dawber.
The Dunedin City Council needs to do more to protect cyclists from injury and death, Cr Richard Thomson says.

His call came as councillors considered a proposal from Cr Bill Acklin to scrap funding for the southern commuter route - cycleways linking South Dunedin with the central city - over the next three years.

About $4.5 million was expected to be invested in the routes, beginning in 2012-13, with a 66% subsidy paid for by the New Zealand Transport Agency and the rest by the council.

However, Cr Acklin's call to axe the project if savings were needed prompted a strong reaction from Cr Thomson, a non-cyclist, who said he wanted more action, not less, to protect cyclists.

"I'm tired of a continuing refusal to see the injuries and deaths of cyclists and pedestrians to be considered secondary to keeping the potholes repaired - keeping road traffic as the highest priority," Cr Thomson told the meeting.

Despite being a non-cyclist, Cr Thomson said he knew others who wanted to cycle "but are too ... frightened too".

It was time the council faced up to the fact cyclists had the same rights as others to be kept safe.

Cr Paul Hudson agreed the funding should stay, although he was yet to be convinced funding the southern commuter route was more important than work to extend cycleways on Portobello Rd, which was deferred in the draft budget.

The arguments won backing from Mayor Dave Cull, an Otago Peninsula resident, who said he was a cyclist "probably because I'm stupid".

"Because it's incredibly dangerous at times," he said.

He was amazed by the numbers of cyclists in Dunedin, as well as those who said they would cycle if it was safer.

"The potential number of cyclists on our roads is huge."

That meant the council's investment in cycleways would have a big impact across the city, and would also help build a sustainable city for the future, he believed.

"It's basically an enabler of where we want our city to be. I think this is critical future-building investment."

Cr Acklin's resolution to remove the funding was lost when put to the vote, but councillors would be presented with a further report on cycleway funding options later this week.