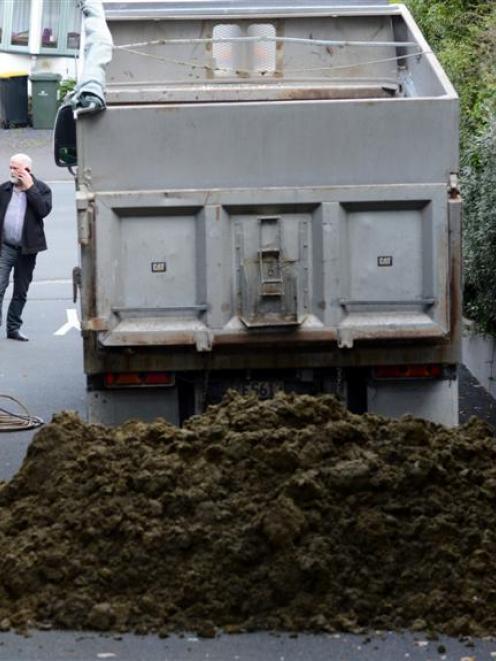 Five Forks farmer Robert Borst says the ORC's water plan change 6A has ''destroyed us as a family'' and provided four years of ''sheer frustration and exhaustion'' for him and his wife, Sylvia.

Mr and Mrs Borst drove 120km from their farm to dump a truckload of excrement in the access way of ORC's Dunedin office about 3.45pm.

The act was not symbolic but reflected the family's angst and disillusionment, he said.

''This isn't something we take lightly,'' Mr Borst said.

''The action we took is absolutely out of sheer frustration and exhaustion.

''We aren't proud of it, but we have done it out of sheer frustration and exhaustion.''

The council's water plan and unwillingness to listen to reason had put the family out of business, he said.

''We have had four years of uncertainty and sheer hell,'' he said.

''We are dairy farmers that want to continue to farm and move forward but they won't give us any certainty.

''The guts of it is the 6A water plan. That's basically shut us out of farming.

''I have lost count of the number of meetings I have had to try to get a resolution.''

He called on ORC chief executive Peter Bodeker to ''front up''.

''Peter needs to ... admit to some of the things they have done that have made it so difficult for us.''

The couple were otherwise ''law-abiding farmers'' who had been pushed to their limit, he said.

He would not go into the specifics of his grievances, but said there was more to come.

Mr Bodeker said he was aware of Mr Borst's grievances but he could not divulge them.

He hoped to resolve the conflict satisfactorily for both parties.

''It's a resource consent matter,'' he said.

''It's about the resource consent Robert is making. That's a process that requires certain actions and activities.

''Our consent is audited externally. I believe we operate it fairly and professionally and how we have handled this case, I think we have treated him very fairly.''

The dumping of excrement was ''out of the blue'' and the council ''dealt with it as quickly as we could''.

Contractors removed the truck which carried the excrement, which was still blocking the access way, and cleaned up the metre-high pile of excrement.

''We certainly don't condone their actions and there's a cost in the clean-up and that's got to be borne by the regional council and, ultimately, the ratepayers,'' he said.

The police were not contacted.

No decision had been made on whether the council would lay a complaint, he said.