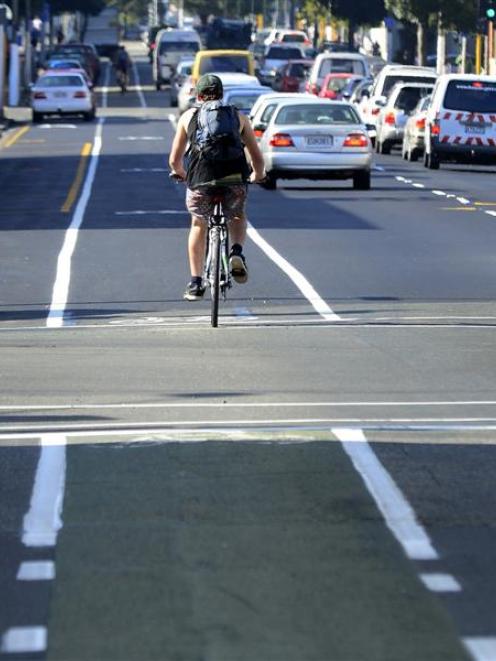 A cyclist heading north on Cumberland St, a Dunedin one-way street, passes St Andrew St and enters one of the new, wider cycle lanes being added by the New Zealand Transport Agency. Photo by Peter McIntosh.
The New Zealand Transport Agency plans to press ahead with improvements to a deadly intersection as part of a push to improve the safety of cyclists on Dunedin's one-way streets.

The agency has written to the Dunedin City Council to update it on work boosting cyclist safety on the city's one-way streets forming part of State Highway 1.

The work covered Cumberland St, between St Andrew and Hanover Sts, and Castle St, between Dundas and St David Sts and between Hanover and St Andrew Sts, as the roads were resealed. The work was expected to be completed in March.

The agency had also settled on a preferred option for improving safety at the intersection of Castle St and Anzac Ave, near the Dunedin Railway Station, where a cyclist was killed in a collision with a truck in November 2011.

Mr Underwood said the agency had consulted businesses in the area which ''overwhelmingly'' favoured keeping the section open to through traffic. The safety work would include construction of a new footpath from Anzac Ave through the lower Stuart St intersection and continuing further south, towards Toitu Otago Settlers Museum.

If endorsed by the council, Mr Underwood expected the work would be completed by July. Mr Underwood was part of a working group involving council and NZTA staff, traffic engineering and planning consultant Axel Wilke and a cycling group, Spokes Dunedin, representative.

He said the working group was also considering longer-term improvements in the central city and North Dunedin, but details were yet to be revealed.

The widening of on-road cycle lanes in the meantime would improve safety, although ''it remains that the safety of cyclists is heavily reliant upon other users of the road network'', he said.

A council suggestion that the agency consider building a separated path for cyclists through the central city was something cyclists also wanted, based on feedback from cyclists to the agency, he said.

However, the loss of roadside parking that would result meant there would need to be further discussion with the council before any ''robust proposals'' were developed, he said.

In the meantime, parking arrangements beside cycleways, including the length of vehicle stays allowed, would be reconsidered, as longer-term parking meant less risk to passing cyclists from opening car doors, he said.