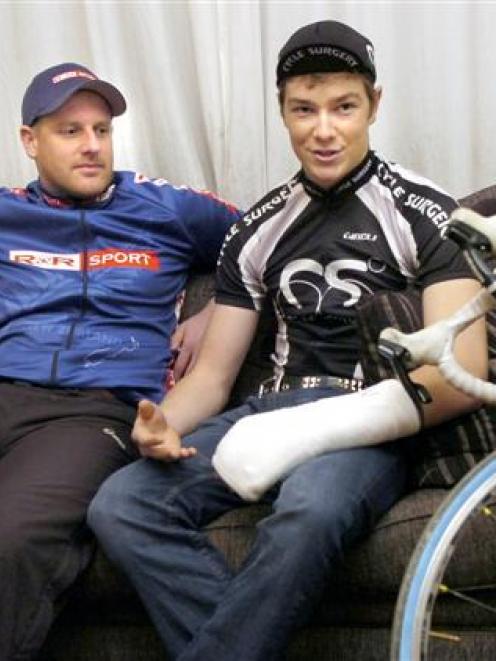 Dunedin cyclists Shane Melrose (left) and Logan Edgar recount how they were stopped and abused by motorists on the Taieri on Saturday while they were out training. Photo by Jane Dawber.
A New Zealand representative cyclist and his Otago team mate say they are flabbergasted after being driven off the road and abused by two women while on a training ride on the Taieri.

"It's stranger than fiction," Logan Edgar (19) said last night, nursing a broken hand, a result of the incident.

The national representative and Shane Melrose (30) were riding along Loan Metal Rd towards Outram on Saturday when the incident happened.

"I've been riding for 20 years, all over the world, and I've never seen anything like that before," Mr Melrose, a primary teacher trainee, said.

Their story began when they heard a car approaching about 1pm.

Its horn was tooted and someone leaned out of the passenger door and abused them for riding two abreast, he said.

"It came up pretty quickly and tried to collect us with the front door," Mr Edgar, a University of Otago commerce student, said.

The car passed them and slammed on its brakes, forcing Mr Melrose into gravel on the wrong side of the road.

Mr Logan was caught behind the open car door, when a woman got out and began slapping and punching him.

She then threw a bottle at him, he said.

"The woman was going nuts. They dragged my bike into the front passenger seat and took off dragging the bike."

Mr Edgar said he did not know how to deal with the woman and was so frustrated he hit the car's rear window, cracking a knuckle.

Mr Melrose called the police when he realised what was happening to Mr Edgar, thinking it would calm the situation.

Meanwhile, Mr Edgar, frantic about his loaned $12,000 bike, flagged down a car, encountering some "farmer types", who reacted to his story by telling him he needed to give up cycling for "kung fu" if he was getting beaten up by "two sheilas".

His bike was found in a ditch and returned to him undamaged by police yesterday, to his relief.

"You wouldn't read about it," Const Saxton said.

Cyclists were "legally entitled to ride two abreast" and she could not think of a situation where the driver's reaction would be acceptable.

"So many of our issues come down to motorist education and them understanding that they don't own the road.

"Every user, as long as they are obeying the law, is entitled to be on the road."