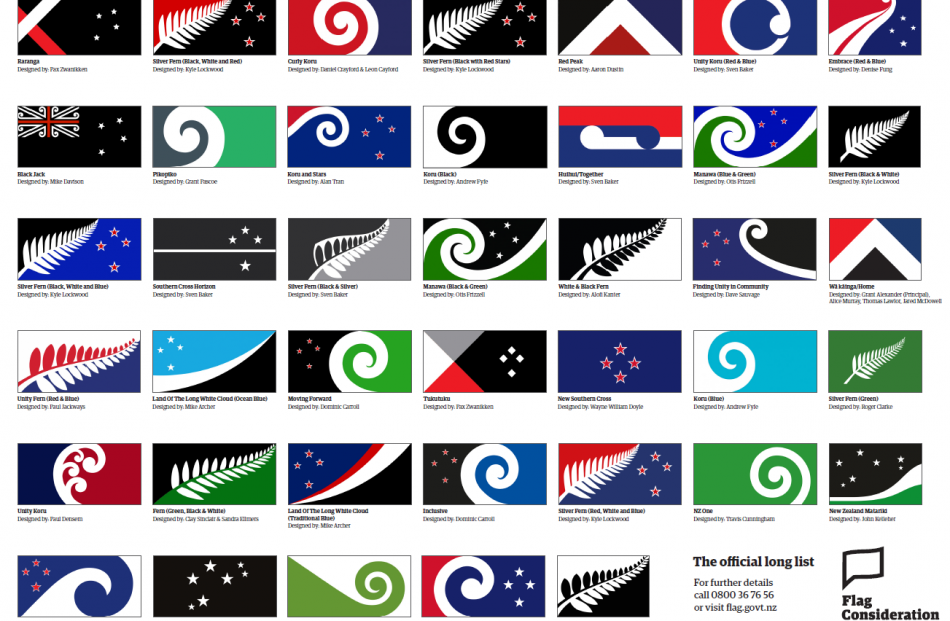 The 40 final flags selected by the committee. Photo supplied.

The group running the flag referendum has just released a set of 40 flag designs from which the final four will most likely be chosen for the vote in November.

The head of the Flag Consideration Project, Professor John Burrows said the potential new flag had to be unmistakably from New Zealand "and celebrate us as a progressive, inclusive nation that is connected to its environment and has sense of its past and vision for its future."

"It is important that those designs are timeless, can work in a variety of contexts, are simple, uncluttered, balanced and have good contrast."

He said the designs would be subject to further robust checks and verification, including intensive intellectual property review.

The public will be asked to vote for their favourite among the final four chosen and then another referendum next year will pit the current flag against the most popular alternative.

Professor Burrows said the panel would announce the four final alternatives by mid-September.

The legislation setting up the two referendum is going through Parliament at present.

The two votes and consultation are budgeted to cost $26 million.

While Labour's own policy is to review the flag, it has objected to the National-led flag review, saying it is a "vanity project" of Prime Minister John Key.

Labour leader Andrew Little wants next year's referendum ditched if the first one attracts less than half the eligible number of voters.

The Government set up a cross-party parliamentary committee which New Zealand First boycotted.

The 40 flags have been submitted by 30 designers.

Groups campaigning for a change have welcomed the release of the 40 potential flags.

Lewis Holden of Change the New Zealand Flag noted that not one of the 40 featured a Union Jack.

The hard question would now be asked: "Should we have a silver fern or a koru? Should we keep the Southern Cross?"

A group pushing for a silver fern flag said five silver fern designs had been short-listed.

"It's not just a mere sports symbol. In far off fields, lie our soldiers who made the ultimate sacrifice, forever memorialised under the silver fern."

The silver fern was on Army and Navy logos, on firefighter, police and sports uniforms, on money, passports, national airlines and soon to be on rockets sending satellites into space.

"It's our national symbol and it's time we put it on our flag."

By Audrey Young of the New Zealand Herald