49 dead after US plane crash 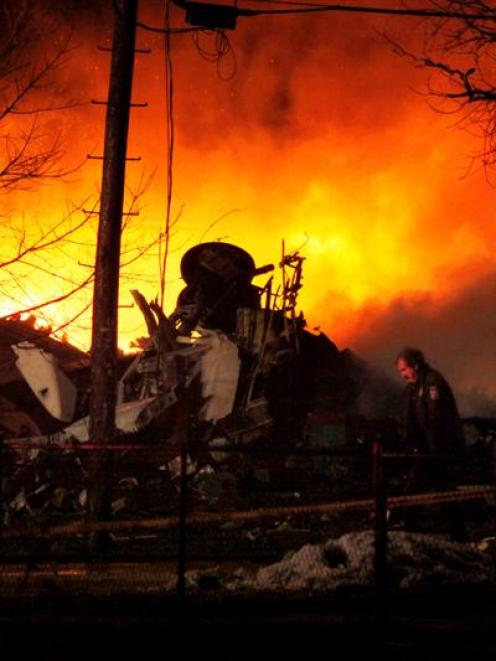 A plane burns after it crashed into a house in Clarence Center, New Jersey. New York State Police say the plane was a 50-passenger commuter aircraft. Photo David Duprey/AP.
A commuter plane has crashed into a suburban Buffalo home and erupted in flames, killing all 48 people aboard and one person on the ground, authorities say.

Flames silhouetted the shattered home after Continental Connection Flight 3407 plummeted into it around 10:20 p.m.

"The whole sky was lit up orange," said Bob Dworak, who lives less than a mile from the crash site.

"All the sudden, there was a big bang, and the house shook."

Dworak said while residents of his neighbourhood about 10 miles from the Buffalo airport were used to planes rumbling overhead, but this one sounded louder than usual, sputtered and made some odd noises.

After hearing the crash, he drove over to take a look, and "all we were seeing was 50 to 100 foot flames and a pile of rubble on the ground.

It looked like the house just got destroyed the instant it got hit," he said.

Witness Tony Tatro said he saw the plane flying low and knew it was in trouble.

"It was not spiraling at all. The left wing was a little low," he told WGRZ-TV.

It was the first fatal crash of a commercial airliner in the United States since August 27, 2006, when 49 people were killed after a Comair jetliner took off from a Lexington, Kentucky, runway that was too short.

Neither the controller nor the pilot exchange any concerns that anything is out of the ordinary as the airplane is asked to fly at 2,300 feet.

Houston-based Continental Airlines issued a statement saying that preliminary information showed the plane carried 44 passengers and a crew of four.

"At this time, the full resources of Colgan Air's accident response team are being mobilized and will be devoted to cooperating with all authorities responding to the accident and to contacting family members and providing assistance to them," the statement said.

Chris Kausner, believing his sister was on the plane, rushed to a hastily established command centre after calling his vacationing mother in Florida to break the news.

"To tell you the truth, I heard my mother make a noise on the phone that I've never heard before. So not good, not good," he told reporters.

Twelve homes were evacuated near the crash site, about 10 miles from the airport.

The tail or part of a wing was visible through flames and thick smoke that engulfed the scene.

Two women believed to be residents of the neighbourhood were being treated at Millard Fillmore Suburban Hospital for what were described as non-life threatening injuries, hospital spokesman Michael Hughes said.

They were transported by ambulance approximately 11:35 p.m.

The crash came less than a month after a US Airways pilot guided his crippled plane to a landing in the Hudson River off Manhattan, saving the lives of all 155 people aboard.

Birds had apparently disabled both its engines.

On December 20, a Continental Airlines plane veered off a runway and slid into a snowy field at the Denver airport, injuring 38 people.

Continental's release said relatives and friends of those on Flight 3407 who wanted to give or receive information about those on board could telephone a special family assistance number, 1-800-621-3263.