A bridge too far and courthouse issues still unresolved 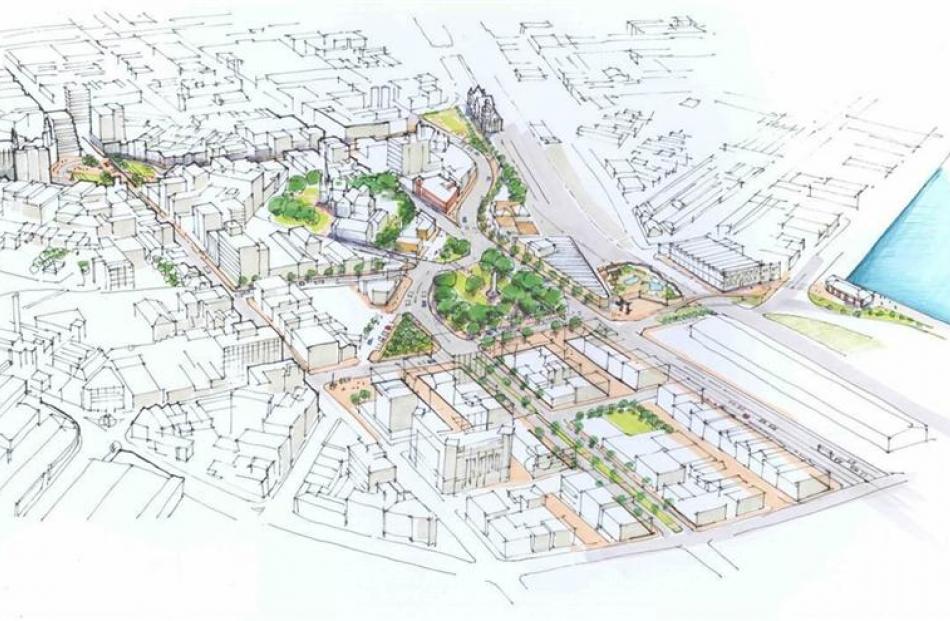 An artist's impression of a Dunedin City Council long term proposal to put a bridge over Rattray St. Image supplied.

No bridge please and why do we keep repeating mistakes when it comes to the built environment?

The bridge is that proposed at Rattray St crossing the railway tracks which may possibly be included in works the city council means to do to ''revamp'' the central city (ODT, 21.5.15).

The mistakes are those in regard to decisions made about the Oamaru and Dunedin courthouses.

Earlier this year, I discussed the bridge in this column at some length so I will only summarise. It is wanted to improve the connection between the central city and the harbourside area which was severed when the railways closed the level crossing at Rattray St .

The railway has used that part of the track for shunting since part of its land facing Cumberland St was sold some years ago. To reinstate the level crossing it would have to build a shunting yard elsewhere which it has no plans to do.

I agree some connection along the line of Rattray St would improve the connection between the central city and the harbourside which is highly desirable.

But Rattray St now affords the last view from the central city to the water of the harbour and the hills beyond and its loss would be significant.

In the earlier column I pointed out the harbour and the hills were part of Charles Kettle's natural boundary for demarcating the built up city from its surroundings. (The Town Belt was the inland equivalent.)

It was a charming conception but from Albany St to the Oval every such viewshaft has been cut off by buildings except this one.

Instead of a bridge the council should make an underpass for pedestrians and light vehicles ideally. This would probably be dearer than a bridge but it would be a much better solution. People's fears about such structures becoming crime spots are exaggerated.

Any hazards can be mitigated by lighting, surveillance and perhaps closing the passage after dusk. Bridges can be places where people do bad things too, both on them and under them. No bridge please.

The proposed works appear to include changes to street furniture, kerbing and paving and rules governing the use of the public spaces. Speed limits for vehicles might be lowered and there has been talk of ''pedestrianising'' parts of Princes St, George St and the Octagon. The idea has been to exclude vehicle traffic from the ''pedestrianised'' areas.

This always causes heated debate and public division and there's a better idea: ''shared roads''. The carriageway can be used by all but with vehicles giving way to pedestrians instead of the other way round as now.

There is concern the central city's retail trade is suffering and that giving the area a spruce up will help. But retailers are suffering from people's rising use of the internet to do their shopping and a spruce up will have at best a marginal effect against that.

Councillor Staynes' concern that George St is looking very ''dated'' and that's a reason people don't want to go there is curious. Most of the buildings are more than a century old and look it. It's probably a reason people like going there. They're mostly well maintained and a pleasant contrast in that respect to those of South Dunedin.

There was a report about different estimates of the cost of strengthening the Oamaru courthouse last week (ODT, 20.5.15). The Government's original figure of $5 million to $6 million was received with incredulity. It has spent $825,420.05 hiring other premises and providing an ugly and inconvenient alternative.

An Oamaru lawyer, Bill Dean, commissioned an engineer, Lou Robinson, to assess the building and estimate the cost of strengthening it which produced a figure of $350,000. The Government has provided a new figure of $1 million to $2 million. It's committed to having a court in Oamaru but it only sits two days a week.

The idea has been canvassed of the Waitaki District Council taking the courthouse over but what would it do with the building to have it better used? Local government picks up an expense central government has dropped and a lot of public money could have been saved if the ministry had acted promptly and adopted reasonable remedies.

The story is very similar in Dunedin. The building was going to be strengthened, then it wasn't. Now it may be. A lot of money has been spent on an inferior alternative. Russell Lund provided an insight into the ministry's confusion and resistance to sensible solutions (ODT, 14.5.15).

An editorial has expressed frustration at what's happened and anxiety for the building's future (ODT, 9.5.15). Here again it's been suggested the city might step in.

This is like the shambles which resulted in the city taking over the Railway Station. It would be better if the Government looked after its own buildings properly.